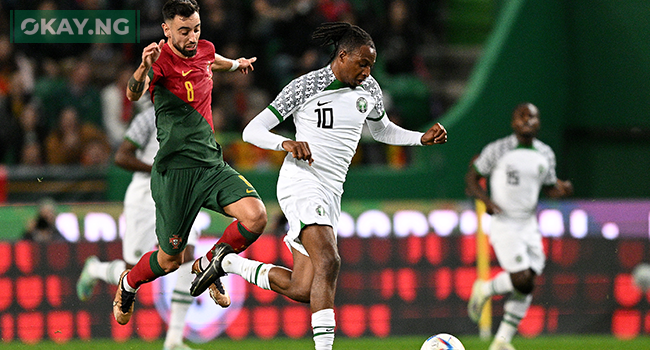 The Super Eagles of Nigeria were defeated 4-0 by Portugal on Thursday night in a pre-World Cup international friendly.

The goal of the game was to prepare the Portuguese team for the World Cup in Qatar the following week. The Eagles won’t be participating in the World Cup.

The Nigerian team was completely destroyed after conceding an early goal.

On the ninth minute, Bruno Fernandes was set up inside the box by Diogo Dalot, and he kept his composure to score on the left side.

After a Nigerian player intentionally gave the ball away in the box in the 35th minute, Portugal made it 2-0 from the penalty spot.

Bruno Fernandes approached the ball, hesitated, and waited for Francis Uzoho to make a mistake before burying the penalty.

The Eagles missed a penalty in the 81st minute that would have allowed them to tie the score.

The penalty kick was taken by Emmanuel Dennis. The ball was headed for the bottom left corner when Rui Patricio made a great reaction save by diverting it onto the post.

In the box, Goncalo Ramos received a quick pass from Raphael Guerreiro, jinxed his defender, and unleashed an unstoppable shot that flew low and in the heart of the net.

With their fourth goal, Portugal put an end to Nigeria’s disaster in the 84th minute.

Goncalo Ramos teed up Joao Mario inside the box and he rolled the ball into the bottom right corner and past Francis Uzoho.