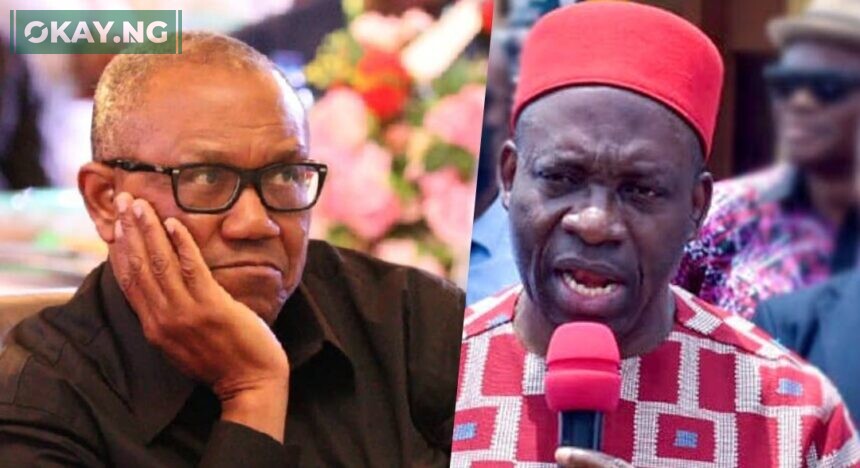 The Labour Party (LP), in the south east has said that Governor Charles Soludo’s tirade against it’s Presidential candidate, Mr. Peter Obi was borne out of envy.

National Vice Chairman of the party in the zone, Chief Innocent Okeke, made the assertion in a statement on Wednesday.

Okeke stated that the party was disappointed that Soludo, who was looked up to as a man of dignity and respect, could allow selfish interest and hatred becloud his sense of judgement.

The party urged the governor to retrace his steps to avoid a somersault from his pinnacle of dignity and respect by falling short of the expectations of the people who looked up to him to be a shining example of the new Igbo leader.

He said: “Hate is a wicked state of mind that when possessed can becloud one’s normal sense of reasoning. And this is exactly what played out in Prof. Soludo’s unreasonable outburst on Peter Obi’s Anambra government investment in 2014.

“Soludo through his hate for Peter Obi was quick to forget that the investment and the fiscal savings came together. The incontrovertible fact remains that Obi saved for the future of his state (Anambra) N75b naira, $50m in each of the three existing commercial banks of today, and 3.5b in the International Brewery.

“And the former handed over to Soludo, now Soludo casting aspersions on Mr. Obi after 9 years he left office with verifiable savings and investment is uncalled for and condemnable by the entire Igbo race and Nigeria at large.

“The international brewery as we know it today employing 10,000 Anambrarians is not a bad investment and the depreciation of stocks is a Nigerian issue that have affected every company’s stock

“Soludo should have employed the wisdom of silence even if he so much hated Mr. Obi, but for the sake of the Nigerian project stand with the mass of the people.

“He should watch it going forward or he creates serious embarrassment for himself and governance as he too needs the support of the people to achieve.

“We still love Soludo and wish him the best in office as Anambra State governor but he must retrace his steps. Nigerians are wiser today than before, it is more reasonable to be on the side of the people to get things done.”