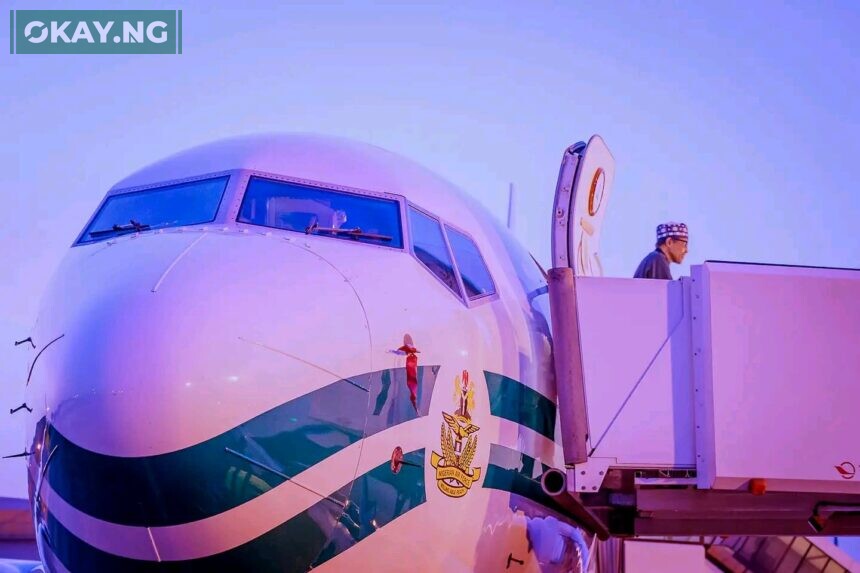 President Muhammadu Buhari on Friday returned to Nigeria after a 3-day trip to South Korea where in participated in the first World Bio Summit.

The president spent about four days in Seoul where the summit themed – ‘The Future of Vaccine and Bio-Health’, held.

Jointly organized by the Government of the Republic of Korea and the World Health Organisation (WHO), the conference brought together leaders of nations, and CEOs of global vaccine and Biologics companies who shared and shaped ideas on the given theme.

Nigeria was invited to the Summit based on her selection with five other African countries by WHO and the European Union (EU) during the last EU-African Summit in Brussels, Belgium in February this year for mRNA technology transfer and Global Training Hub for Bio-manufacturing of vaccines on the African continent.

There in Seoul, President Buhari delivered a statement and met separately with President Yoon Suk-Yeol of the Republic of Korea and Ban Ki-Moon, Chair of Ban Ki-Moon Foundation for Better Future.

While seeking ways to foster more effective partnerships that impact positively on the lives and safety of Nigerians, the president said Nigeria is ready to become the global hub for vaccine production and distribution.

He called for the speedy take-off of local production of mRNA vaccines, after the World Health Organisation (WHO) selected Nigeria as one of six African countries to receive technology needed to produce the vaccines.

President Buhari also called urged African Ambassadors to continue to give preference to the protection of the interests of the African continent and her people, even as he invited top Korean business executives to increase their investments in Nigeria, while his Administration would continue to make determined efforts to improve the enabling domestic environment for businesses to flourish.

During his meeting with some Nigerians in South Korea, the president told his felllow citizens that they are the “faces of Nigeria,” and should endeavour to project a positive image of the country through their actions, characters, conducts and general comportments.

A major highlight of President Buhari’s South Korea trip was his witnessing the signing of the Memorandum of Understanding (MoU) between Nigerian National Petroleum Company (NNPC) Ltd and Daewoo Group of South Korea for the rehabilitation of the Kaduna refinery.

The president was particularly excited as the signing came against the back of ongoing rehabilitation works at Warri refinery by same Daewoo Group which will at the first instance, deliver fuels production before the first half of 2023.

According to the Nigerian leader, “Daewoo Group has massive investments in the automobile, maritime and other sectors of our economy. I am also aware that Daewoo is currently engaged in the execution of the NLNG train seven project and also constructing sea-going LPG vessels for NNPC and her partners.”