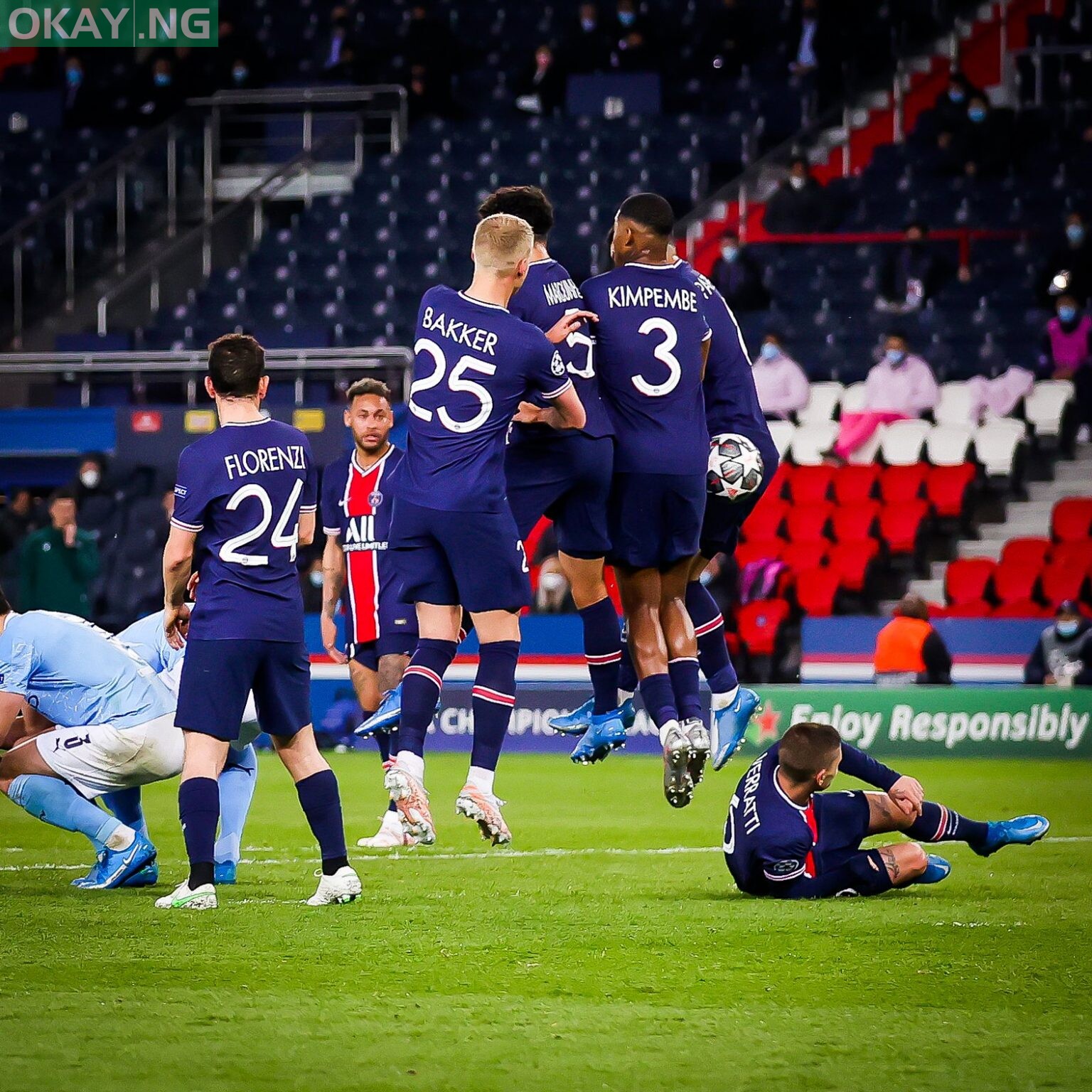 Riyad Mahrez curled in a free-kick as a much-improved second half performance saw Manchester City come from behind to beat Paris Saint-Germain 2-1 in the first leg of their blockbuster Champions League semi-final on Wednesday.

Marquinhos had powered in a header to give PSG an early lead and the deserved advantage at half-time at the Parc des Princes.

However, City skipper Kevin De Bruyne’s cross dropped in to pull City level just after the hour mark and Mahrez then beat Keylor Navas from a 71st-minute free-kick to complete the turnaround and give Pep Guardiola’s side the advantage going into next Tuesday’s return in Manchester.

After starting so well, PSG lost their way after half-time and had Idrissa Gana Gueye sent off in the 77th minute as a shocking tackle on Ilkay Gundogan earned the midfielder a straight red card.

Having already failed to win at home to Manchester United, Barcelona and Bayern in this season’s Champions League, the Parisians now face an uphill struggle in England if they are to reach the final for the second year running.

It is, then, first blood to Emirati-backed City against Qatar-owned PSG in a tie that is also a battle of competing Gulf nations.

After all the money pumped in by their owners from Abu Dhai, City are eyeing a first ever Champions League final, and this was their first appearance in the semi-finals since 2016, when they defeated PSG in the last eight before losing to Real Madrid.

However, PSG can still be optimistic about their prospects after sensational away performances against Barcelona and Bayern in the last two rounds.

PSG coach Mauricio Pochettino is hoping to once again get the better of Guardiola, just as he did when his Tottenham Hotspur side beat City in the quarter-finals in 2019.

– Game of two halves -The first leg started so well for the French club too, with Neymar in the mood and Angel Di Maria and Gueye especially impressive early on.

They went ahead in the 15th minute as Marquinhos broke away from the attentions of Gundogan to attack Di Maria’s right-wing delivery at the near post and head in.

The PSG captain was making his first appearance since coming off in the first leg of their quarter-final defeat of Bayern, a game in which he also scored.

Indeed for all the importance of Neymar and Kylian Mbappe to the Parisians, the Brazilian defender has now scored in both the quarter-finals and semi-finals of the Champions League in back-to-back seasons.

It was not until the 42nd minute that the visitors really had a chance, Bernardo Silva teeing up Phil Foden for the shot that Navas saved.

PSG could have doubled their lead early in the second half, but the stretching Marco Verratti was just unable to connect with Mbappe’s low ball across the face of goal.

By then the pendulum was swinging towards City, as De Bruyne sent a powerful overhead kick just over the bar.

The equaliser arrived in the 64th minute. When a corner from the right was played short, the ball came all the way to De Bruyne, in line with the left edge of the box.

The Belgian looked up and bent in a cross which missed everyone including Navas as it nestled in the far corner.

The visitors had the momentum and won a free-kick 25 metres from goal with 20 minutes left when Gueye fouled Foden.

Mahrez, born and brought up in the Paris suburbs, curled a low strike from 25 metres through the wall and beyond the reach of Navas.

Things got worse for the home side soon after as Gueye was dismissed by German referee Felix Brych for a nasty challenge that caught Gundogan on the Achilles.

City saw out the game against the 10 men to take the advantage into the return.

A first Champions League final is in sight for Guardiola’s side, who could also wrap up the Premier League title this weekend.