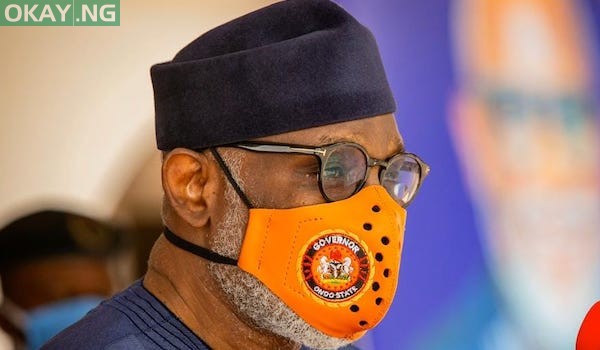 The Supreme Court, on Wednesday, upheld the election victory of Governor Rotimi Akeredolu of Ondo State.

The apex court, in a split decision of four-to-three, dismissed the appeal that was brought before it by candidate of the Peoples Democratic Party, PDP, in the governorship election that held in the state on October 10, 2020, Eyitayo Jegede, SAN.

A seven-man panel of justices of the Supreme Court heard the appeal.

The apex court, in its majority verdict, said it found no reason to set-aside the concurrent judgements of both the Court of Appeal and the Ondo State Governorship Election Petitions Tribunal, which earlier dismissed Jegede and PDP’s case for being incompetent.

Jegede and his party, PDP, had approached the apex court to void the July 16, 2021, judgement of the Court of Appeal in Akure, which validated Akeredolu’s election.

The appellate court had affirmed the decision of the tribunal which dismissed the joint petition Jegede and the PDP lodged against the declaration of Akeredolu of the All Progressives Congress, APC, as the valid winner of the Ondo gubernatorial contest.

Jegede and PDP had in their case, queried the legal validity of Akeredolu’s nomination by the national Caretaker Committee of the APC headed by the Governor of Yobe State, Mai Mal Buni.

The Appellants urged court to determine whether signing of such nomination form by Buni did not amount to a gross violation of the 1999 Constitution, as amended.

They specifically urged the court to determine whether Buni, as a sitting governor of Yobe state, could double as National Chairman of the APC to sign the nomination of Akeredolu, SAN, for the governorship election.

However, the Justice Theresa Orji-Abadua led panel of the appellate court dismissed their case which it said only succeeded in part.

Though the appellate court acknowledged that the issue raised by the Appellants, had constitutional implication. It however, held that non joinder of Buni as a party in the matter, proved fatal to Jegede’s case.

The appellate court therefore declined to set-aside the decision of the election tribunal, which held that the issue of Buni signing Akeredolu’s nomination form, was an internal affairs of the APC.

Dissatisfied with the verdict, Jegede and PDP, through their counsel, Dr Onyechi Ikpeazu, SAN, approached the Supreme Court, urging it to determine whether it was a matter of necessity to join the Chairman, APC National Caretaker Committee and Governor of Yobe State, Buni, in the petition he lodged against Akeredolu’s candidature, in spite of immunity provided for governors in Section 308 of the 1999 constitution.

On his part, Akeredolu, aside from seeking the dismissal of the appeal, also lodged his own Cross-Appeal.

He contended that Jegede’s petition was statute barred, insisting that it was filed outside the 14 days period stipulated by the Constitution.

He argued that both the tribunal and the appellate court erred in law by not declaring Jegede’s case as statute barred.

Likewise, the Independent National Electoral Commission, INEC, also lodged a Cross-Appeal, contending that the appellate court erred in law when it assumed jurisdiction in a matter, which it claimed was a pre-election case.

Akeredolu, APC and INEC, prayed the apex court to set aside the verdict of the appellate court and uphold the results of the October 10, 2020 governorship election as declared.

Meantime, in their split judgement on Wednesday, while four members of the apex court panel led by Justice Agim, agreed with the Respondents that non joinder of Buni rendered the appeal incompetent, three others, led by Justice Peter-Odili, disagreed.

Justice Peter-Odili’s group went ahead and dismissed all the three Cross-Appeals as lacking in merit, stressing that since the APC, for which Buni acted, was a party in the case, there was no need to include him as a necessary party in the appeal against Akeredolu.