A Kaduna High Court on Wednesday discharged and acquitted leader of the proscribed Islamic Movement in Nigeria, Ibrahim El-Zakzaky and wife, Zeenat.

Justice Gideon Kurada delivered the verdict in an eight-hour ruling on the no-case submission application filed by the defendants.

Counsel to the defendants, Marshal Abubakar who represented the lead counsel in the suit, Femi Falana, SAN, informed reporters shortly after the trial ended in Kaduna.

“The trial of Sheikh El-Zakzaky and his wife Zeenat has come to an end as the court found them not guilty of the alleged crime filed against them by the Kaduna State Government.

“The court found that the charges that were filed in 2018 pursuant to the Penal Law enacted by the state government in 2017 over an alleged offence committed in 2015, were incompetent.

“The court, presided over by Justice Gideon Kurada, ruled that the charge was not supposed to be filed in the first place, as the government cannot arraign someone for a said crime that was not an offence at the time.

“The court ruled that the charge was incompetent, as the court agreed that El-Zakzaky and his wife had committed no offence.

“The court, thereby, discharges and acquits the defendants, as there should have been no charge in the first place.

“No party asked for cost of fine,” Abubakar told reporters.

The lead prosecution team, Mr. Dari Bayero, however, declined comment on the ruling as he drove out of the court premises.

The Kaduna State Government had charged El-Zakzaky and Zeenat with eight counts, bordering on alleged culpable homicide, unlawful assembly and disruption of public peace, among other charges.

The defendants had pleaded not guilty to the charge.

The News Agency of Nigeria reports that on September 29, 2021, the court dismissed a no-case submission filed by El-Zakzaky and his wife Zeenat.

In the motion, El-Zakzaky asked the court to dismiss the allegations against him and his wife for lack of evidence.

But in his ruling, Justice Kurada dismissed the no-case submission, saying that it was premature to rule on the application to quash the charges against the defendants in view of the clear provisions of the Kaduna State Administration of Criminal Justice.

Buhari returns to Abuja after 76th UNGA in New York 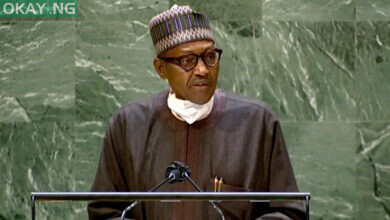