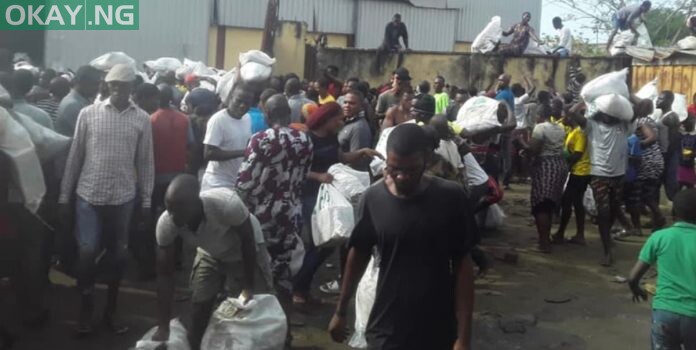 The Osun Food and Relief Committee has reacted to the looting of COVID-19 palliatives uncovered by residents of the state.

The Secretary of the Committee, Bayo Jimoh, in a statement on Friday, explained that the food items were not distributed up till now because it was waiting for approval from the donor.

According to Jimoh, the committee was still expecting the approval of (CACOVID) to distribute the palliatives, adding that the food items were not hoarded as suggested.

He said: “We are in receipt of information that the warehouse in Ede, where has been attacked and food items carted away.

“It has, therefore, become imperative to put the records straight in view of the falsehood and the misinformation making the rounds about the donated relief items.

“One, it is not true that the food items were hoarded.

“Two, the food items have no direct bearing with the State Government, as they are within the purview of the Food and Relief Committee.

“Three, the items can only be distributed after a formal flag-off by the CACOVID Office, Abuja.

“Four, we do not have the authority to distribute the food items without approval from Abuja.

“Besides, the Committee is still expecting the rice component of the donated items, which is 40, 230 bags of 5kg.

“All these are part of the reasons the items were still in the warehouse up till the time of the invasion.”

“However, the rice components of the donated items are yet to be delivered up until now.”