Former female Kogi state governorship candidate, Natasha Akpoti, has slammed the leaders of the National Council for Women Societies (NCWS) for awarding Governor Yahaya Bello of the state as the  ”Most Gender-Sensitive Governor in Nigeria.”

The award ceremony, which was shown in a live Television show was held on Saturday, January 16.

Natasha has however seen Yahaya Bello unfit for the award, taking to her official Twitter handle, Natasha said the award is an insult and the council should bury their heads in shame. 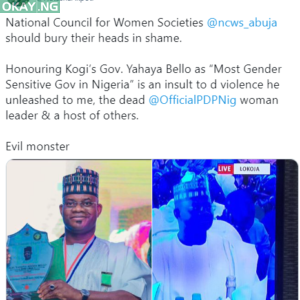 ”National Council for Women Societies @ncws_abuja should bury their heads in shame. Honoring Kogi’s Gov. Yahaya Bello as “Most Gender-Sensitive Gov in Nigeria” is an insult to d violence he unleashed on me, the dead

@OfficialPDPNig  woman leader & a host of others. Evil monster”