A Nigerian man has taken to Twitter to reveal a heartbreaking story of his sister was murdered by her husband in Italy.

According to the man, the couple had a fight like any other couple but the husband, unknown to the innocent wife has to hold grudge against her.

The man said he was on phone with his sister and 20 minutes after they dropped the call, her husband killed her. 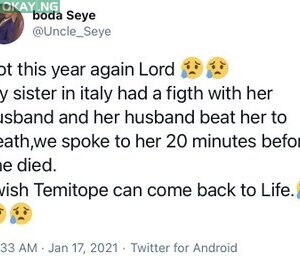