The Lagos State Emergency Management Agency (LASEMA) in a statement issued by the Director-General of the agency, Olufemi Oke-Osanyintolu, said the outbreak occurred around 1 pm at 16, Ladipo Street in Mushin.

Oke-Osanyintolu explained that first responders including LASEMA operatives have been deployed in the scene to prevent the fire from escalating to adjoining buildings.

The statement reads partly: “The agency received distress calls to the 767/112 and responded to a report on the above. Upon arrival at the scene of the incident, it was discovered that a mattress shop was the initial source of the fire.

“The flames subsequently escalated to other closely adjoining shops and the joint responders led by the Agency DG/CEO, Nigeria Police, LASG fire, LRU fire, LNSC worked together to curtail the inferno from escalating to more adjoining buildings.

“There have been severe operational challenges due to huge crowds who have failed to comply with authorities and maintain appropriate distance for responders to work freely.”

But the statement did not give details if there was any loss of human life in the incident. 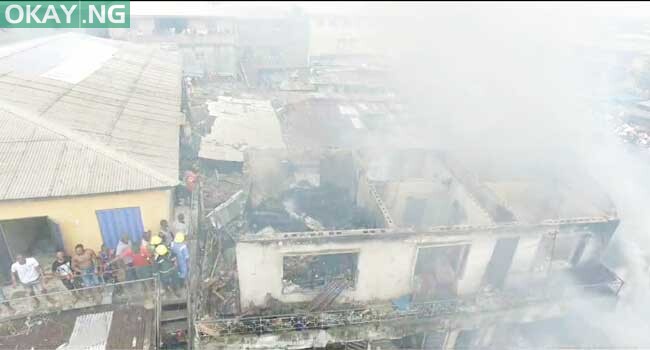