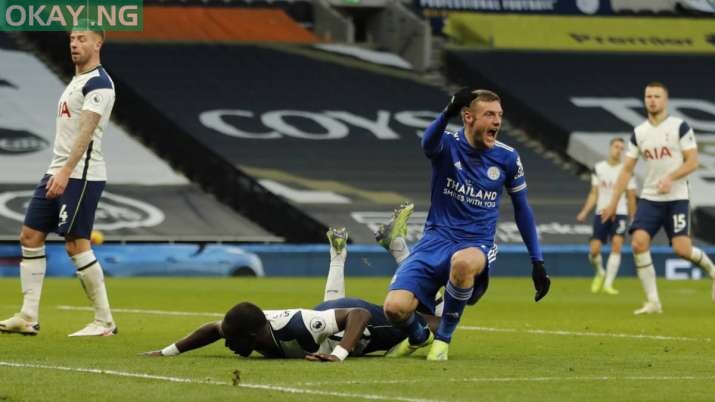 Tottenham’s Premier League title challenge suffered another blow as Leicester moved above Jose Mourinho’s men into second with an impressive 2-0 away win on Sunday.

This is coming after Nigeria’s Wilfred Ndidi was handed a starting role in the EPL encounter, shortly after returning to action earlier this month.

The Nigeria international on December 3 played his first game for the Foxes against the Ukrainian side at Slavutych Arena in the Europa League.

Wilfred Ndidi in the first half of the Spurs encounter on Sunday made 100 per cent pass accuracy and aerial win.

He made a total of 19 recoveries in the game, the most any player has made in a single Premier League game this season.

The 23-year-old midfielder was out of action in September when he suffered a groin injury against Burnley.

Jamie Vardy’s penalty and a Toby Alderweireld own goal moved the Foxes to within four points of leaders Liverpool as Spurs for once could not rely on Harry Kane and Son Heung-min to dig them out of trouble.

Tottenham were top of the table until a last-minute winner for Liverpool gave the champions a 2-1 win on Wednesday but back-to-back defeats could see them drop out of the top four come the end of the weekend should Manchester United or Chelsea win their games in hand.

Liverpool boss Jurgen Klopp described Spurs as a “counter-attacking monster” but their deficiencies when not allowed the ability to break were exposed by Leicester’s clever game plan. The Foxes did not leave themselves exposed and posed the greater threat in transition.

But Tottenham were undone by a moment of madness by Serge Aurier with virtually the last action of the opening period when he barged into Wesley Fofana just inside the area.

A VAR review was needed before referee Craig Pawson pointed to the spot and Vardy drilled home his sixth spot-kick of the season to give Brendan Rodgers’s men the lead.

Mourinho saw enough in the first 45 minutes to throw on Gareth Bale for the second-half for his first Premier League minutes in six games.

But in keeping with the Welshman’s second spell in North London since rejoining on loan from Real Madrid, Bale struggled to make any sort of impact.

Only a few millimetres denied Leicester a second in a bright start to the second-half for the visitors as Maddison latched onto a ball over the top from James Justin and fired beyond Lloris, only for a VAR review to rule the goal out for offside.

Mourinho had sacrificed Tanguy Ndombele to bring on Bale and then lost his other midfield creator, Giovani Lo Celso, to a hamstring injury.

Lucas Moura replaced the Argentine to form a front four alongside Kane, Son and Bale, but Spurs became disjointed by the changes and were easily picked off by the Leicester counter-attack.

Tottenham inflicted more damage on themselves for the second goal as Vardy’s header at the back post was turned into his own net by Alderweireld.

Kasper Schmeichel was at fault for the opening goal as Leicester suffered a 2-0 defeat to Everton on Wednesday, but the Dane bounced back to show his class with a sensational stop to deny Son turning home a corner at the back post and giving Spurs a lifeline 20 minutes from time.

Leicester should have won by an even more comfortable margin as Youri Tielemans blazed over a great chance and Harvey Barnes saw appeals for a second penalty turned away.

But two goals were enough for Rodgers to get the better of Mourinho for the first time in his managerial career and show that Leicester deserve to be taken seriously as contenders for a top-four finish.