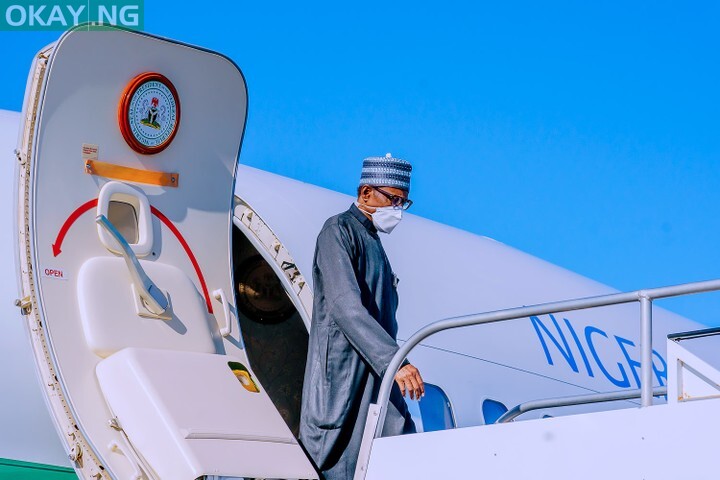 President Muhammadu Buhari on Sunday returned to after loaded weeklong engagements at the 76th Session of the United Nations General Assembly (UNGA) in New York, United States of America.

The News Agency of Nigeria (NAN) reports the Nigerian leader came back with a special request from the UN Secretary General, Antonio Guterres, to help in restoring socio-political order in troubled West African countries.

Guterres, who commended Buhari for his leadership roles in Africa as well as stabilisation of the West African sub-region, was speaking during an audience with the Nigerian leader at the sidelines of the 76th Session of the UNGA.

The UN scribe observed that Africa, especially West Africa, was generally seen as an ocean of stability and good governance, but was deeply concerned at recent reversal of fortunes in democratic rule in some parts of the West African sub-region with coups overturning elected institutions.

He, therefore, urged Buhari to continue to show leadership as he looked up to Nigeria to help stabilise the sub-region in terms of democracy and good governance.

On terrorism, the secretary-general commended the efforts of Nigeria on this global phenomenon.

Guterres assured the Nigerian leader of the UN’s continued support in her efforts to address the prevailing security and humanitarian challenges that had arisen especially with the Internally Displaced Persons.

The president applauded Guterres for his global leadership and the success of the 76th Session.

On Sept. 22, Buhari participated via a video message in the hybrid High-Level event, tagged “Transformative Actions for Nature and People”, on the margins of the UNGA.

He revealed that the Federal Government had initiated some specific actions to tackle and reverse the severe trend of biodiversity loss, which affects the whole world.

Also in New York, on Sept. 23, Buhari at the Food Systems Summit, as part of the High Level meetings of the 76th Session of UNGA, reaffirmed the commitment of the federal government to attain national food security.

He said that Nigeria had developed a “food system focused development agenda that prioritises healthy diets and affordable nutrition, inclusive, efficient, resilient and sustainable, which will contribute to rebuilding our economy, create jobs and spur growth across sectors, while sustaining our ecosystems”.

The Nigerian leader, who addressed the 76th Session of the UN Assembly on Sept. 24, raised alarm over the recent trend of the unconstitutional takeover of power in some West African countries, urging world leaders to reject such illegal acts.

According to Buhari, such unconstitutional takeovers, sometimes in reaction to unilateral changes of constitutions by some leaders, should not be tolerated by the international community.

The president warned that the democratic gains of the past decades in West Africa ‘‘are now being eroded’’ due to these negative trends.

The president also called for outright debt cancellation for countries facing the most severe challenges occasioned by the COVID-19 pandemic.

The speech also touched on the efforts of his administration on anti-corruption, debt suspension, international trade, UN Security Council Reform, Palestinian Question and racial discrimination, among others.

While still in New York, Buhari reiterated the determination of his administration to work on an ambitious Energy Plan towards reducing the energy shortcomings by year 2030.

He spoke in line with Nigeria’s role as a Global Theme Champion for the Energy Transition, theme of the High-Level Dialogue on Energy on the sidelines of the 76th UNGA.

Also on the sidelines of the 76th UNGA, Buhari engaged some world leaders, including the President of Burundi; Amb. Linda Thomas-Greenfield, the Permanent Representative of America to the United Nations; Prime Minister of Netherlands, Mark Rutte; as well as Queen of the Netherlands, Her Majesty, Maxima Zorreguieta, in bilateral talks.