US President Donald Trump will not meet North Korean leader Kim Jong Un next month for what would have been a historic diplomatic summit.

Trump announced this in a letter to Jong-Un released by the White House on Thursday morning.

He said the decision was made based on the “tremendous anger and open hostility” in a recent North Korean statement.

Trump said it would be “inappropriate” to hold the summit as scheduled in Singapore on 12 June.

In the letter, Trump said he was very much looking forward to meeting him “some day”.

“I was very much looking forward to being there with you. Sadly, based on the tremendous anger and open hostility displayed in your most recent statement, I feel it is inappropriate, at this time, to have this long-planned meeting.

“You talk about your nuclear capabilities, but ours are so massive and powerful that I pray to God they will never have to be used,” he said.

“The world, and North Korea in particular, has lost a great opportunity for lasting peace and great prosperity and wealth. This missed opportunity is a truly sad moment in history.

“Therefore, please let this letter serve to represent that the Singapore summit, for the good of both parties, but to the detriment of the world, will not take place,” he added.

Trump and Kim were scheduled to meet in Singapore on June 12, for what would have been the first face-to-face meeting between a US and North Korean leader.

It was also learned that Trump withdrew from the summit after a North Korean vice minister of foreign affairs slammed Vice President Mike Pence on Wednesday as a “political dummy,” the latest harshly worded statement from Pyongyang.

According to reports, Trump and his aides were infuriated by the statement and wanted to respond forcefully, multiple people familiar with the situation.

The specific and personal targeting of Pence is what irked US officials, three people familiar with the matter said. 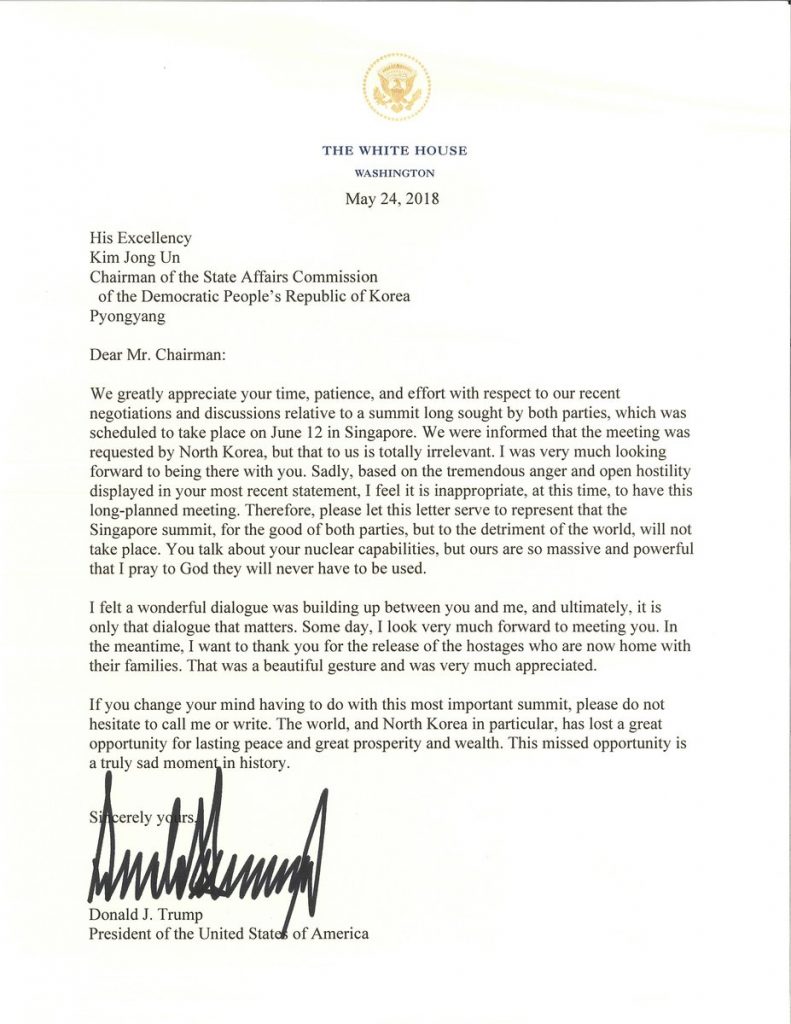