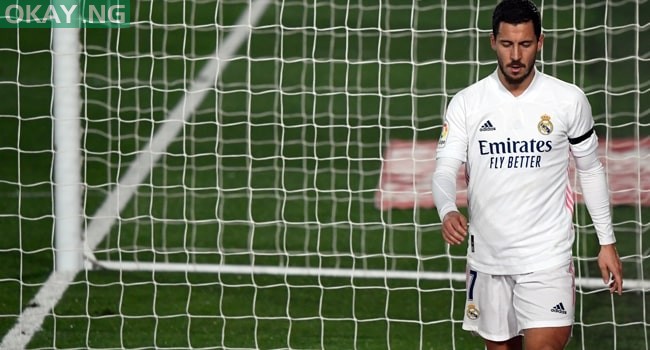 Eden Hazard suffered another injury setback on Saturday as he was substituted in the first half of Real Madrid’s game at home to Alaves in La Liga.

The Belgium international, whose first season in Spain was ravaged by injury, was replaced by Rodrygo in the 28th minute, shortly after appealing for a penalty.

Hazard appeared to be caught on his left knee by an Alaves defender as he chased down the rebound after his shot was saved, and was pictured grimacing moments later.

Spanish media reported at half-time that Hazard had sustained a muscle problem.

He missed the start of this season due to injury and then tested positive for coronavirus on November 7.

He scored a penalty for his first Champions League goal in a Real shirt in the club’s 2-0 win at Inter Milan in midweek.