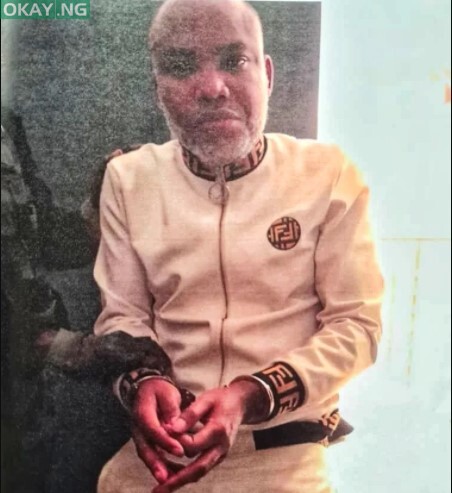 The federal government of Nigeria has returned the leader of the Indigenous People of Biafra (IPOB), Nnamdi Kanu, to Nigeria.

The attorney-general of the federation (AGF), Abubakar Malami, in a press conference at the ministry of justice in Abuja on Tuesday, said Kanu was arrested on Sunday through the joint efforts of the intelligence and security services.

He said: “Self-acclaimed leader of the proscribed secessionist Indigenous People of Biafra (IPOB), Kanu, has been intercepted through the collaborative efforts of Nigerian intelligence and Security Services.

“He has been brought back to Nigeria, in order to continue facing trial after disappearing, while on bail regarding 12 count charge against him.

“Recent steps taken by the Federal Government saw to the interception of the fugitive Kanu on Sunday the 27th day of June 2021.

“It is recalled that Kanu was arrested on 14th October 2015 ‘on 11 count charge bordering on terrorism, treasonable felony, managing an unlawful society, publication of defamatory matter, illegal possession of firearms, improper importaton of goods, among others.

“A judge at the Federal Hgh Court, Abuja on 28th March, 2019, revoked Kanu’s bail that was granted him on health ground and issued a bench warrant for his arrest on the same date, over his failure to appear in court for hearing.

“He has, upon jumping bail, been accused of engaging in subversive activities that include inciting violence through television, radio and online broadcasts against the Nigerian state and institutions,

“Kanu was also accused of instigating violence especially in south-eastern Nigeria that resulted in the loss of lives and property of civilians, military, paramilitary, police forces and destruction of civil institutions and symbols of authorities.”

Following his return, the Department of State Services (DSS) re-arraigned him at the federal high court in Abuja on charges bothering on alleged treason.

The presiding judge, Binta Nyako, granted a request by the DSS to remand Kanu in its custody pending the determination of his trial.