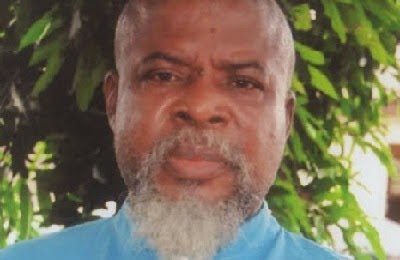 The General Overseer of the Kingdom of God Conscious Movement International, 65-year-old Rev Lord Ojee also known as Nduwusi Kanu is now cooling off in police cell after being fingered as the mastermind of the kidnap and murder of the for­mer Chairman of Okigwe Local Government Area of Imo State, Hon. Godwin Igbo who was 70-year-old at the time of the incident.

The cleric was said to have hired a gang of kidnappers for a fee of N2m, out of which he made an initial deposit of N50,000 for the abduction of Igbo over an alleged land dis­pute and chieftaincy title
of Eze Agu Nechenba 1 of Ikpoeze 1 of Arondizuogu community in Imo State.

The operation, which went awry, led to the death of the for­mer council boss who was thereafter buried in a shallow grave in a thick forest at Lokpanta, Abia State by his abductors.

Saturday Sun reports that police investigations into the matter, however, led to the arrest of two of the kidnappers, one of them, a nephew to Rev Lord Ojee, 22-year-old Adindu Chukwu a.k.a. Alhaji and a 27-year-old Udoh Amaechi Oko who both collected N500,000 as ransom from the family of the deceased even after he was murdered.

The Enugu State Commissioner of Police, Mr Mohammed Adamu said the former council chief was on a transit to Enugu State on April 10, 2014 when he was kidnapped, murdered and buried in a shallow grave in a thick forest at Lokpanta, Abia State.

CP Adamu said he received a petition by the family of the deceased in May over the kidnap. The police boss subse­quently transferred the case to the Anti-Kidnappers Squad to investigate. It was learnt that in the course of investigations by the Alex Akinlalu-led team, detectives had an encounter with two suspected kidnappers, one of them identified as ‘Black’, a cult member of Vicking Confraternity who received gunshot injuries and later died. But before he died, the police were able to recover two phones of the late Godwin Igbo from him.

‘Black’ was also said to have confessed before he died that he was part of the gang that killed the late Igbo and buried him in an Abia forest. On October 15, the Anti-Kidnappers Squad arrested Udoh Ameachi Oko at Okigwe in Imo State and this also led to the arrest of Adindu Chukwu a.k.a. Alhaji at Garikki in Okigwe, Imo State. Chukwu was said to have confessed that it was Lord Ojee, who sent them to kidnap the late Godwin Igbo with a promise to give them N2m, out of which he gave them N50,000 “for drinks and welfare.”

This in turn led to the arrest of the General Overseer of God Conscious Movement International, Rev Lord Ojee at Uratta road junction, Aba/Port Harcourt road, Aba. All the suspects, the police boss confirmed, are now at the Anti-Kid­napers Squad’s custody where they have allegedly confessed to the crime.

In his confession, one of the suspects, Chukwu a.k.a. Alhaji said:

“Rev Lord Ojee is my uncle. He is the younger brother to my mother. Rev Lord Ojee comes to the village, Umulolo Okigwe every month and he had a misunderstanding with the late Godwin Igbo over 10 years ago over land dispute and the chieftaincy title of “Eze Agu Nechenba 1 of Ikpo Eze 1 of Arondizuogu community. My uncle, Rev Lord Ojee approached me and wanted me to organise some boys to kidnap the late Godwin Igbo to show him that he has power.

I had to meet ‘Black’, one of the leaders of kidnappers who is now late and he organ­ised five members for the job and that include myself. My uncle promised to settle us with N2 million if the job was accomplished and he gave me N50,000 for drinks and welfare which we used to enjoy ourselves before we carried out the operation” , he said.

“We went to the late God­win Igbo to kidnap him in his village at Ekpa Eze in Aro Ndinuzo –Ogu in Okigwe Lo­cal Government Area of Imo State around 8.00pm on April 10, 2014. We took him away and we kept the victim inside a Toyota car and put him in the boot of the car. He fainted and in the process he died.

We took the corpse of the late Igbo into a thick forest and buried him in a shallow grave on April 10, 2014. We collected the deceased’s two phones and called his family members and demanded N2 million ransom. The family members didn’t know that Igbo was dead. They paid N500,000 to us and two days later, I went to meet my uncle, Rev Lord Ojee and explained to him that Godwin Igbo was kidnapped and was dead. The intention of my uncle was not to kill Igbo but to kidnap him and keep him away but unfortunately he died.

I came to meet my uncle, to collect the N2 million that he promised us. My uncle in­sisted that since we have collected N500, 000 from the deceased’s family that that should be okay for us. My uncle gave me N5,000 for transport.”

“My un­cle, Ojee quickly called the elders in the village to Genesis Hotel, Okigwe to hear from the elders whether they will mention his name or suspected whether he is the one who killed Godwin Igbo. I have serious quarrel with my uncle for refusing to pay the N2 million he promised us. I was given N60,000 as a share of the money we collected from the deceased’s family.”

“It was Chukwu who contacted our gang leader, ‘Black’ who is now late, that we should kidnap Godwin Igbo over a land and chieftaincy dispute with his uncle, Rev Lord Ojee. We kidnapped the deceased and kept him in the boot of the car. Later, he died. We called the deceased’s family and de­manded N2 million and they paid N500,000 and I was given a share of N80,000”, he said .

“I have been in ministry for almost 50 years. It is true I had a misunderstanding with the deceased, Godwin Igbo for over 10 years. I know the suspect, Adindu Chukwu, he is my elder sister’s son. I heard that Igbo died when they kidnapped him”, he said.

CP Adamu, however, stated that the sus­pects would soon be charged to court, saying the police had already gone to the scene of the crime to exhume the corpse of Godwin Igbo.