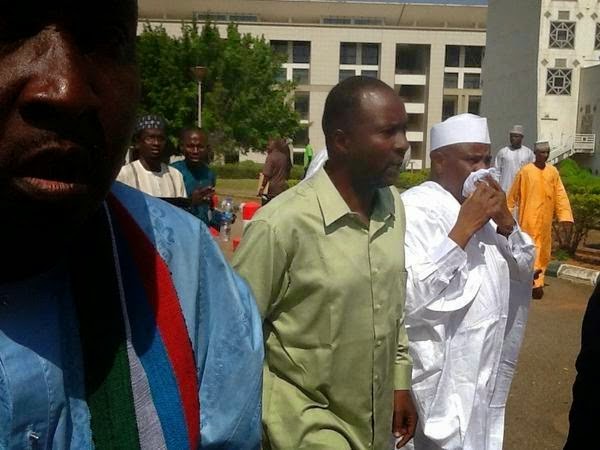 According to a new report on Punch, the police may arrest the Speaker of the House of Representatives, Aminu Tambuwal, over Thursday’s crisis at the National Assembly in Abuja. Sources told Saturday PUNCH on Friday in Abuja that the Inspector- General of Police, Mr. Suleiman Abba, had ordered that the Speaker should be “invited” over the crisis.

The Department of State Services was said to have given a similar order asking that the Speaker
should be invited by any of its commands. This was sequel to information that Tambuwal was sighted in Sokoto State on Thursday evening where had gone to pick the All Progressives Congress governorship expression of interest and nomination forms for the 2015 governorship election.

But the Force Public Relations Officer, Emmanuel Ojukwu, said, the IGP had yet to give an “express order” for the Speaker’s arrest. Ojukwu said the officers investigating the crisis would determine those to be arrested for prosecution.

A source at the police headquarters confided in one of Punch’s correspondents that the signal from the IGP’s office specifically directed the Federal Capital Territory and Sokoto State commissioners of police to invite Tambuwal and that if he resists, he should be arrested.

“The involvement of Sokoto State Commissioner of Police is likely because the Speaker was in Sokoto yesterday to pick the APC’s governorship form to contest the 2015 election,” the source said.