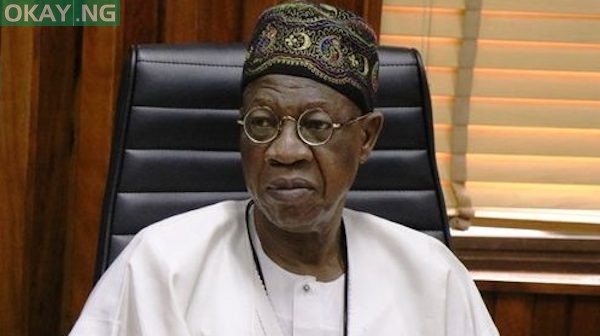 The Federal Government on Wednesday said Twitter, Facebook and other over The Top and social media platforms operating in Nigeria must register as a business.

The Minister of Information and Culture, Lai Mohammed, disclosed this at the Presidential Villa, Abuja after the Federal Executive Council meeting presided over by President Muhammadu Buhari on Wednesday.

In his words: “As you are aware, last Friday the Federal Government suspended Twitter operations in Nigeria indefinitely. And the reason we gave was because of the persistent use of the Twitter platform for activities that are capable of undermining Nigeria’s corporate existence.

“On Friday, also the government directed the regulatory body, the National Broadcasting Commission, to immediately commence the process of licencing all OTT, Over The Top social media operations in Nigeria.

“And I believe that you’ve done that I think by today, that advert is out asking that all OTT, and social media coverage operating in Nigeria should apply for registration and licensing.

“I want to repeat that is because Twitter has consistently made its platform available to those who are threatening Nigeria’s corporate existence that is the reason for suspending their operations in Nigeria.

“Because, we’ve found out that Twitter is actually the platform of choice for a particular separatist leader who resides outside the country and issues directives to its members to attack symbols of government authority, such as the police, the military, the Electoral Commission offices, correctional centres, etc. And this is being done willfully and consistently without any consequences from Twitter.

“You know, no country worth its name will tolerate that. And no company, no matter its self importance will force any nation to accept this. It may interest you to know that most of the OTT and social media platforms operating in Nigeria do not have any office in Nigeria and do not pay taxes to Nigerian government for the billions they earn here.

“That is not the best practice globally, and that is why we are insisting that for you to operate in Nigeria you must first be a Nigerian company and be licenced by the broadcasting commission.

“Therefore, any OTT or social media platform operating in Nigeria must do so legally. One, register with Corporate Affairs Commission, the licence by the National Broadcasting commission and then adhere to the conditions stipulated in their licences. We have already advertised the notice to the companies concerned to apply for registration of licence.

“But that is not the issue. Many of the commentators that have said suspending the operation of Twitter is like stifling freedom of expression. And I said no. Twitter is just one of the many platforms through which Nigerians can express themselves. There is Facebook, there is Instagram, there’s WhatsApp. There’s Google Hangout, and others. They have not been suspended.

“And in any case, like I have said in several fora, it is because we have a country called Nigeria that we can start talking about free speech. And of course, there has to be a country before people can able to transact their businesses using social media platforms.

“When I addressed you on Wednesday, I said, among other things that Twitter’s mission in Nigeria is suspect. And I went further to say yes, thatt Twitter funded the EndSARS  protests in Nigeria last year. And people have challenged it. And I’m glad that the Cable has done some fact finding and their conclusions are as follows:

“They said the truth is that, fact checking showed that indeed, Twitter played a prominent role in helping to raise funds for the EndSARS protesters. Whether they paid directly, helped to pay or helped to raise funds, it’s a matter of semantics. And here is what the factcheck the online newspaper revealed:

“A, that on October 14 2020. ….. retweeted an article about the protests with the EndSARS hashtag alongside a link to the feminist coalition, one of the groups providing support for the protesters at the time.

“B, that on the same date, he asked people to donate via bitcoins to support the movement. C, on October 16, Dussen launched a special emoji to give the protesters more visibility on the microblogging platform. So, whether donated money himself or help to raise money, the tweeter owner is one of those who helped to fund the EndSARS protests that was later hijacked leading to loss of lives and massive destruction of property.

“like I said last Wednesday, you can see from the factcheck the role of Jack Dossy is suspect. His interest in Nigeria is inimical to our growth. Our decision to suspend Twitter has been lauded by some, it has been decried by some. But we want to make it clear that what is important to us is the sovereignty of Nigeria.