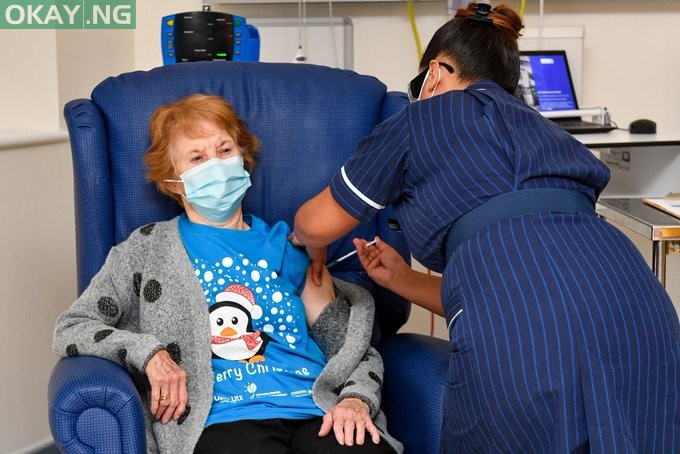 Britain on Tuesday began the biggest vaccination programme in the country’s history, with a 90-year-old grandmother becoming the first person to receive the Covid vaccine produced by Pfizer-BioNTech.

The historic inoculation was given to Margaret Keenan in Coventry, central England.

Last week Britain became the first country to approve the Pfizer-BioNTech vaccine, raising hopes of a breakthrough in the pandemic, which has killed more than 1.5 million worldwide.

Britain has been one of the worst-affected countries in the world, with more than 61,000 deaths in the outbreak from 1.6 million cases.

Prime Minister Boris Johnson, who spent days in intensive care with Covid-19 earlier this year, called it a “huge step forward in the UK’s fight against coronavirus”.

UK Health Secretary Matt Hancock, who has offered to have the jab on live television to allay public fears, said the roll-out was a “key moment” that would protect the most vulnerable.

The head of the state-run National Health Service in England, Simon Stevens, said it was a “decisive turning point” against the “greatest health challenge” since the NHS was founded in 1948.

Regulatory approval for the vaccine was given last Wednesday, sparking a race against time to prepare scores of vaccination centres across the country.

Up to four million doses are expected by the end of December.