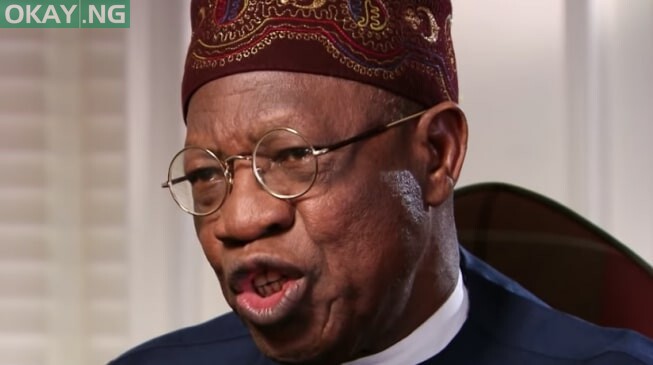 Minister of Information and Culture, Lai Mohammed, has warned that Nigeria is sitting on a keg of gunpowder if the issue of fake news is not urgently addressed, insisting on the regulation of social media in the country.

The Minister of Information and Culture, Lai Mohammed and the House Committee on Information, National Orientation, Ethics and Values were sharply divided on the matter on Tuesday.

Mohammed had appeared before the committee to defend the 2021 budget proposed by his ministry.

The Minister was responding to questions from the lawmakers when he appeared before the committee to defend the 2021 budget proposal.

He warned that the next war that will be fought in the country and across the world, maybe provoked by misinformation on social media.

He said: “The biggest challenge facing Nigeria today is fake news and misinformation. Based on that, we dedicated an entire National Council on Information meeting to that issue after which we launched a national campaign against fake news in July 2018.

“We said then that the next war will be fought without a shot being fired, but with the use of fake news. We didn’t stop there. We went on a tour of all media houses to solicit their support in the fight against fake news. We launched the campaign to regulate social media which was bitterly contested by the stakeholders.

“We kept saying that if we don’t regulate social media, it will destroy us. Social media and fake news will not destroy Nigeria. In 2017, there was a fake video of the herdsmen and farmers’ crisis. It was a video of what happened in Tanzania and was played in Nigeria as if it was true. In 2017, a very popular entertainer in Nigeria raised a false alarm that students of the College of Education, Gidan Ways, Kaduna State, had been murdered.

“There was an almost reprisal only for him to find out that it was not true. In the same 2017, we found out that some of the videos being posted are things that happened in other parts of the world. When there was a problem between South Africa and Nigeria, they were posting videos of what happened in India and Tanzania to suggest that Nigerians were being roasted alive. That was what led to the reprisals in the malls.

“At every time, the government has continued to draw attention that this is a menace. Unfortunately, it is not happening in Nigeria alone. The University of Ohio conducted research and discovered that Hillary Clinton lost the Presidential election to Trump because of fake news which was promoted by Russia and they worked on three issues.

“First was that Trump had been endorsed by the Pope. The second was that when she was Secretary of State, she authorised the sale of arms and also that she was a very old person. These three things did a lot to sway the votes.

“We are sitting on a time bomb on this issue of fake news. Unfortunately, we have no national policy on social media and we need one. When we went to China, we could not get Google, Facebook and Instagram. You could not even use your email in China because they made sure it is censored and well regulated.

“We need technology and resources to dominate our social media. We need a social media policy to determine what can be seen and what cannot be seen.

“The recent #ENDSARS war was fought on social media. They mobilised using social media. The war today revolves around two things. Smartphones and data and these young men don’t even watch television or listen to the radio or read newspapers.

Odebunmi Olusegun, Chairman of the House of Representatives Committee on Information, National Orientation, Ethics and Values, supported the idea.

He said, “Social media has come to stay. What the government should do is to look for technology that will work together with what is in the space.

“We are not asking the government to stop social media. The most important thing is that the government should go and look for the technology to regulate so that you can equally be working within the space.”