Following the rejection of Mr Ibrahim Magu as the substantive Chairman of the Economic and Financial Crimes Commission, the President of the Senate, Bukola Saraki, said the upper chamber had played its constitutional role as an arm of government. 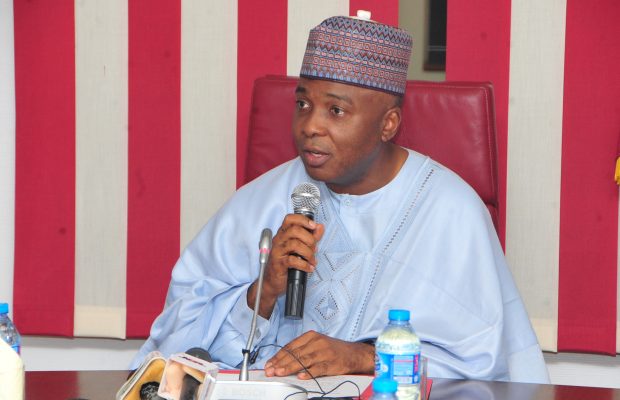 President of the Senate, Bukola Saraki

Saraki said, “with the screening being carried out in a transparent manner, we see democracy at work.

“I believe we have played our part; we have followed the Constitution and due process.

“We hope that the executive will quickly act and bring in another name as soon as possible so that the activities of the agency will not be crippled.’’

The lawmakers, in a voice vote at plenary session, on Wednesday, rejected Magu’s re-nomination after a letter from the Department of State Services indicated that he failed another integrity test.

The Chairman, Senate Committee on Federal Capital territory (FCT), Sen. Dino Melaye, had brought to the notice of Magu that the Senate on Tuesday received a letter from the DSS, stating that he failed the integrity test.

Melaye said the content of the letter submitted to the Clerk of the Senate, Mr Nelson Ayewoh, stated reasons for DSS’s conclusion.

He said the two reports from the DSS addressed to the Senate in October and to the chamber were received by the office of the Clerk of the Senate on Tuesday.

He said, “Mr Ibrahim Magu, nominee for the position of the Chairman of the EFCC, the first report indicted you.

“But because of the letter from Mr President, you are here again. Mr Chairman, if I have your permission, I want to read page five, paragraph 14 of that report.

“It says: `In the light of the foregoing, Magu has failed the integrity test and will eventually constitute a liability to the anti-corruption fight of the present administration.”

Melaye said the Senate had the prerogative to request the DSS to screen any government appointee sent for confirmation.

“We do request for the screening of every nominee that comes to this Senate by the DSS. It did not start with you and it will not end with you.

“The DSS is to us what the FBI and CIA is and we cannot ridicule, undermine, and put in abeyance, the report of the DSS.

“Anyone who wants to be chairman of EFCC must have the character and characteristics from the words of Caesar. You must be unblemished, you must be pure, and you must be stainless.”

Sen. Barnabas Gemade (APC-Benue), expressed concern that there was a lot of indicting issues in the DSS report.

He said the letter contained among others, three major accusations dealing with security files, his relationship with one Air Commodore Umar Mohammed as well as integrity.

Gemade said, “The letter says that the same Umar Mohammed is a dubious personality and this report, therefore, tends to show that your friendship with this Umar Mohammed indicates that your integrity is also in question.

“You have not responded to that matter and as a Senator, I believe, you need to respond to this issue.

“Who is Umar Mohammed and what your relationship with him is will help deal with the totality of this report.”

The lawmaker further raised concern about the manner in which the commission was handling high profile cases under Magu.

He said the life of those cases seems to be totally endless, adding that those cases have been in court for almost a decade.

Magu said the accusations against him were unfounded, stressing that the DSS did not give him a fair hearing before writing to the Senate.

He said that the credibility of the DSS was at stake in view of the fact that besides not giving him a fair hearing, two varying letters were sent to Senate on the same day.

“DSS submitted two varying reports about me on the same day. That goes to (question) tell you the credibility of such an institution.

“How can you submit two different reports on the same matter, the same date? I have respect for everybody in this place.

“Please, what does it mean if an institution submits two varying reports on the same person on the same day?

“Also, I was not invited at the DSS. So I was not given a fair hearing on the issues that made them say I failed integrity test.

“On the DSS report you referred to, up to this time, the DSS has not invited me to a fair hearing. It is a fundamental issue. It is a constitutional issue,’’ he said.

On claims of two varying letters by Magu, Clerk of the Senate, Mr Nelson Ayewo, denied receiving two letters on the same day.

Ayewo said, “Only one letter was received in my office on Oct.3, 2016, with reference number SB 114/2 from the Department of State Services.

The DSS report, dated March 14, contained several accusations of Magu flying first class against the directive of President Buhari and associating with people being investigated by the commission.

It further stated that Magu lived in a N20m per year apartment rented for him by an individual being investigated by the commission.

The Presidency had in July 2016 written to the Senate, seeking the screening and confirmation of Magu as substantive chairman of EFCC.

The rejection of the first nomination necessitated President Buhari to re-submit the name for reconsideration which had again been rejected by the Senate.