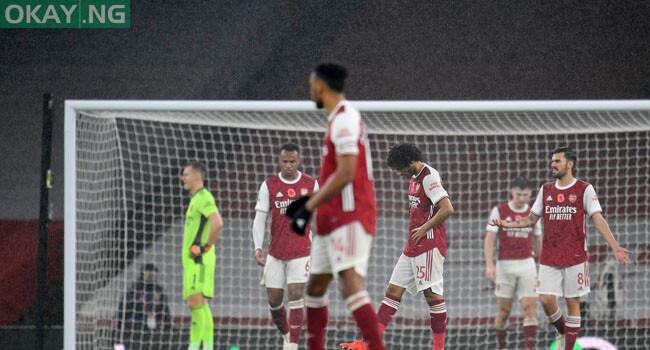 Aston Villa stormed into sixth in the Premier League as Ollie Watkins scored twice in a comprehensive 3-0 win over Arsenal at the Emirates.

Bukayo Saka’s own goal opened the scoring for the visitors, who could have run up an even more flattering score as John McGinn saw a goal harshly ruled out by VAR and Jack Grealish was denied by a goal-line clearance from Dani Ceballos.

Arsenal had beaten Manchester United at Old Trafford for the first time in 14 years last weekend in what appeared to be the latest sign the Gunners are heading in the right direction under Mikel Arteta.

But the Spaniard suffered the joint heaviest defeat of his managerial career in a chastening evening for the hosts, who were second best from start to finish.

Villa thought they had taken the lead inside the first minute when McGinn rifled into the roof of the net from Grealish’s pass.

Back underway at the Emirates.

However, after a VAR review lasting over four minutes, the goal was ruled out for Ross Barkley in an offside position standing in front of Arsenal goalkeeper Bernd Leno being ruled to be interfering with play.

Villa had lost their last two matches after a stunning start to the season that included a 7-2 thrashing of Liverpool a month ago.

But Dean Smith’s side did not look like a team lacking confidence as Arsenal struggled to cope with the movement of Grealish, Barkley and Watkins.

Barkley’s pass freed Matt Targett down the left and his cross was turned into his own net by Saka as he desperately tried to stop Trezeguet from applying the final touch.

Alexandre Lacazette wasted Arsenal’s best chance to get back into the game when he wastefully headed over Kieran Tierney’s cross just before half-time.

There was a further blow to the hosts at the break as £45 million ($59 million) new signing Thomas Partey had to be replaced by Ceballos due to a thigh injury.

Villa remained the bigger threat in the second-half as Bernd Leno was forced into saves by Trezeguet and Grealish.

The visitors finally killed the game off as a contest 18 minutes from time when Watkins — who scored a hat-trick in the famous win over Liverpool — headed home Barkley’s excellent volleyed cross.

Ceballos saved Arsenal moments later when Grealish seemed set to get the goal his performance deserved.

A brilliant counter-attack then did give the scoreline the reflection Villa deserved as Grealish drove forward before feeding Watkins to fire past Leno.

A second consecutive home defeat for Arsenal sees Arteta’s men slip to 11th, four points off their major target for the season of a top-four finish.

Villa on the other hand are starting to dream about what could be possible as they lie just three points off the top of the table with a game in hand.