The Omega Fire Ministry has issued a statement on the attempted arrest of its founder, Apostle Johnson Suleiman. 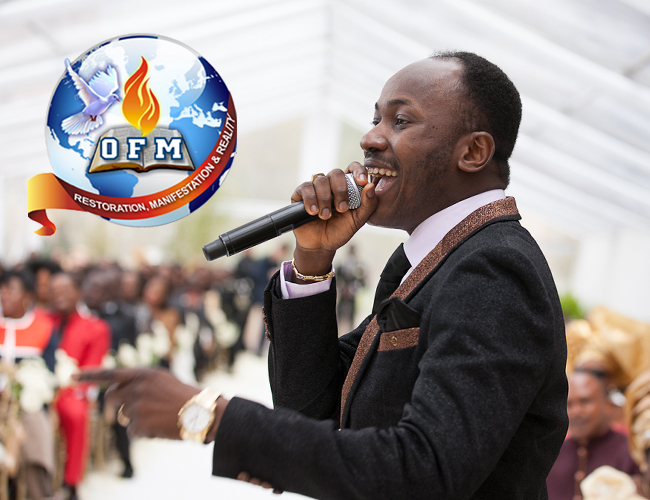 This is to inform the millions of followers and supporters of Apostle Johnson Suleman all over the world that the man of God is very safe, and that the attempted arrest by the Department of State Security on the man of God on the instruction and orders of the President of the Federal Republic of Nigeria, Muhammadu Buhari was unsuccessful.

Over the last couple of months, thousands of defenseless Christians have been killed across various cities in Nigeria, with nearly a thousand so far killed in southern Kaduna alone. Shockingly, there has been no firm statement or action by the Nigerian government to stop these destruction of lives and properties neither has any one been arrested or charge to court, largely because these senseless killings are been perpetrated by kinsmen of the President. And because of the body language of the President, these killings have progressively increased.

However, Apostle Johnson Suleman, in his love for Nigeria and as God’s representative to the people, has refused to keep quiet about all these immoral happenings, and he has continued to speak truth to people in position of authority; calling on the government to do the needful, and protect the citizens. Only recently, God’s servant, Apostle Johnson Suleman was forced to call on Christians all over Nigeria to defend themselves against these killers since the spate of killings has been on the rise. Interestingly, the call by the man of God for the Christians to take caution and defend themselves where necessary has become the core focus of the Nigerian government, despite the fact that it has evidently failed to protect her people. It is now determined to exploit the instruments of the State to go after the man of God.

Let it be on record that this assault occurred around 1am in the morning of 25/01/2017. Apostle Johnson Suleman is not facing any corruption charges neither is there any petition against him. The attempted arrest being masterminded by the PRESIDENCY against him is unconstitutional, morally wrong and procedurally defective.

This country was founded on the principles of equality before the law and justice. There should be strict adherence to the Spirit and Letters of our Constitution and nobody should be treated as a common criminal. As the country belongs to every one of us irrespective of religion, sex and social status.

By the way, the man of God in his prophecies for the year 2017 which he issued before the end of 2016 had already informed the public how God showed him that in 2017 the government of President Buhari will come after him because of his stand against the policies and actions of the government. But God is ever faithful to protect his Anointed from the oppressors.

Beyond just being an esteemed and beloved preacher of the gospel, Apostle Johnson Suleman is a renowned philanthropist and statesman. On a weekly basis, he sponsors widows, jobless graduates and several Nigerians to start businesses and give meaning to their lives, while also giving scholarships to countless number of people to obtain university education.

All these self-sacrificing philanthropic gestures are not directly or indirectly funded by the church, but directly from Apostle Johnson Suleman’s private resources and from his several business interests.

Even with the present needless sufferings and hardship the present government of President Buhari has plunged Nigerians into, Apostle Johnson Suleman has remained undeterred and consistent in doing his best in alleviating the sufferings of the people. While in Ekiti, he doled out over One Million Naira to certain people who had various financial challenges. These individuals were strangers to him, but because they are fellow Nigerians, he considers them his brothers and sisters, and he just had to do something to end their despair. This is the kind of good heart the man of God, Apostle Johnson Suleman, has for his country and his compatriots.

We are hereby calling on the Nigerian government to put a stop to senseless attacks on Christian leaders, especially Apostle Johnson Suleman. These are leaders and beacons of hope whose integrity and teachings have kept this country in unity and consistently given hope to millions of Nigerians faced with hunger, neglect, abuse and ill-treatment from the government they optimistically voted into power.

We will like to inform the government of Nigeria that Omega Fire Ministry has numerous branches of her ministry in over 51 nations, (with over 500,000 membership in Nigeria alone) and all our National churches have been mandated to take our protest letter to the Nigerian Embassy in all these nations, and to inform the government of the respective nations of the despotic and tyrannical approach of the government of President Buhari to Christians and Christian leaders in Nigeria. We also make bold to say that we shall employ all means whatsoever legally permissible to seek redress and defend ourselves and our Apostle should the Presidency continue this senseless attack. It is unacceptable that the killers of the people are not being arrested, but respected men of God are made object of attacks by the institutions of government.

We like to unequivocally state that Apostle Johnson Suleman believes in the progress and unity of Nigeria, and this will remain the core of all his messages. However, no intimidation from the government will stop him from speaking the truth to the government, and standing in defense of the defenseless.

We believe that the greater and brighter days of this country are very close-by, and God in His judgment will surely displace the enemies of his people, regardless of how highly placed they are.

Apostle Johnson Suleman will continue praying for the good of Nigeria, and for the Almighty God to guide her leaders’ right.

In conclusion, we use this medium to call on the government of President Buhari to heed the call of all Nigerians, and step-up in his leadership! Protect the people. Stop the mindless killings going on daily in Nigeria. Stop the unwarranted persecution against the church, the Christian community and the wanton destruction of churches. As father of the nation, let your body language and your voice be visibly heard as leader of a united Nigeria.