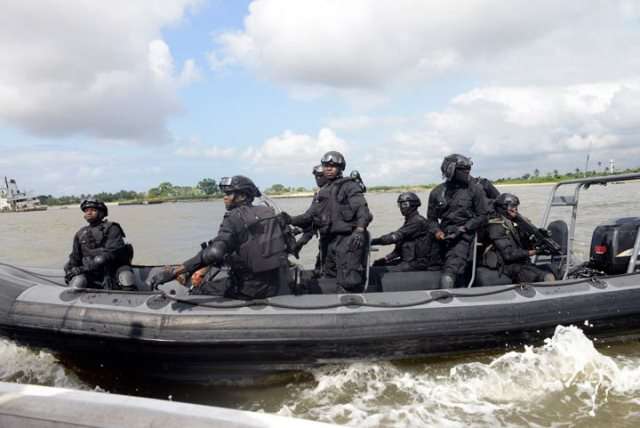 The Nigerian Navy has destroyed 40 illegal refineries, equipment and petroleum products valued at N3 billion in a special operation in the Niger Delta.

The Flag Officer Commanding (FOC) Eastern Naval Command, Rear Adm. James Oluwole, disclosed this in Port Harcourt on Saturday at the conclusion of the first phase of “Operation River Sweep I.”

Oluwole said the operation which began on Jan. 8 and ended Feb. 4 aimed at tackling spate of oil theft and vandalism of critical oil and gas installations, especially along Bonny–Onne channels in Rivers.

According to him, two warships, NNS Ologbo and NNS Burutu, eight gun boats and helicopters participated in the 28-day operation.

“Operation Rivers Sweep was activated on Jan. 8 to stem the tide of increasing and disturbing reports of illegal bunkering in Onne general area.

“Over some months now, we have discovered that lots of illegal refineries are operating within the area with stealthily and specially designed dug-in canoes moving stolen petroleum products.

“In the operation, two vessels MV Lewis Ejiro and MV Lady Swithin were impounded while 40 illegal refineries, 60 large wooden and speed boats loaded with 5.24 million litres of diesel were destroyed.

“The total estimated loss for the destroyed illegal refineries and other equipment is about N3 billion”.

Oluwole said that five suspected oil thieves were arrested during the operation and handed over to relevant prosecuting agencies.

He said the operation was successful due to the use of Swamp Buggy machines which completely crushed metallic tanks and denied oil thieves ability to revive the destroyed refineries.

The FOC said the operation had reduced spate of attacks on oil and gas installations and sea piracy, particularly in the Onne and adjoining creeks in the area.

“We have realised that whenever we burn down illegal refineries with metal tanks and some days after our troops leave the scene, the oil thieves would return and revive the refineries.

“The use of swamp buggy machine has proved to be effective; and the colossal losses of boats and stolen oil products will discourage bunkering activities in our areas of operation.

According to him, the battle against oil thieves is built on a tripartite arrangement which involved surveillance, enforcement and operation.

The FOC pointed out that similar operations were currently on-going in its naval Central Naval Command.
Read more at http://www.herald.ng/navy-destroys-n3bn-illegal-refineries-in-special-operation/#TeEhkTfYhW106z5k.99