A syndicate of two criminals have met their Waterloo in Kano.

According to a statement released by Abdullahi Haruna Kiyawa, the Publicity Officer of the Kano State Police Command, the suspects robbed and extort money and other valuables from individuals at night within the Sabon Gari Area of Kano.

His accomplice, Chidera Anune was recently arrested by the Police Force after the search for him intensified. He was found on a military camouflage, and in possession of two iPhone Mobile handsets and an Infinix Mobile device. He will accordingly be charged to court upon completion of ongoing investigations.

One named Joseph Ifeanyi Usalo of Kofar Ruwa Market Kano complained that the Chidera, who was dressed in Military Camouflage, together with Miracle Nnamoko, went to his shop located at Kofar Ruwa Market, intimidated and forced him to transfer the sum of Twenty Thousand Naira (N20,000:00) into Miracle Nnamoko’s bank account, and the sum of Thirty-Five Thousand Naira (N35,000:00) into an account bearing Chidera Anuna.

They also made away with his iPhone 12 Pro Max Mobile phone valued at Seven Hundred and Eighty Thousand Naira (N780,000:00) and also retrieved the password of the mobile phone from him.

The Commissioner of Police, Kano State Command, CP Sama’ila Shu’aibu Dikko, fsi, further warned that criminals will have no hiding place in Kano State. He advised that they either repent or leave the State completely.

Mr. Dikko also thanked the good people of Kano State for their prayers, encouragement, continuous support, and cooperation. He urged residents to pray for the State, the Nation and report incidences to the nearest Police Station, and not to take laws into their hands. 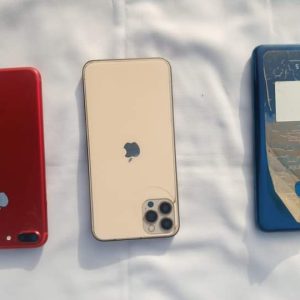