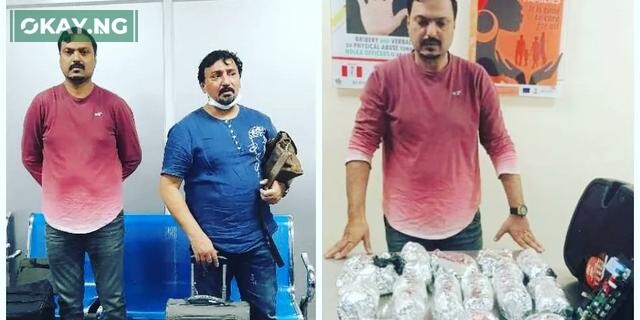 Femi Babafemi, NDLEA’s Director of Media and Advocacy, made this known in a statement on Sunday.

According to the NDLEA spokesman, the drugs were concealed in a public address system while the suspects were attempting to board a Qatar Airways flight to Lahore, Pakistan via Doha, Qatar.

He added that the suspects, Asif Muhammed, 45, and Hussain Naveed, 57, who hold Nigerian residence permits, were frequent travelers to Nigeria under the guise of doing textile business.

The statement reads, “The operatives at the Skyway Aviation Handling Company Plc (SAHCO) import shed of the airport on Friday seized 13 cartons of Tramadol 225mg and 200mg, imported from Karachi, Pakistan.

“This included Cannabis, Cocaine, and Methamphetamine as well as Tramadol 225mg and Rohypnol concealed in footwear and soap packs going to UAE, Dubai.

“A 32-year old Oladitan Serah Olufunmilayo, who presented the consignment for export, was arrested.”