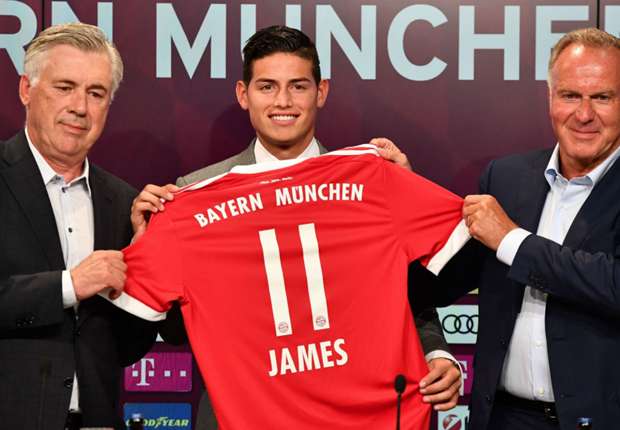 New Bayern Munich loan star James Rodriguez appears to have not given up on his Real Madrid dream despite moving to the Bundesliga.

James Rodriguez claims the door is not closed on his Real Madrid career despite being presented as a Bayern Munich player on Wednesday.

The Colombia international has agreed a two-year loan move to the Allianz Arena , where he will hope to recapture top form after finding himself on the fringes of the Madrid first team.

The 26-year-old earned a big-money transfer to the Santiago Bernabeu in 2014 following his impressive performances at the World Cup in Brazil.

He played under Carlo Ancelotti during his first campaign in the Spanish capital and must now impress the Italian coach again to force his way into the Bundesliga champions’ starting XI.

“We have some great players and I have to fight for a starting position,” he told a news conference.

“I can play on the left or the right wing as well as a playmaker. I will play wherever the coach wants me to play.

“It is a new life for me. Everything is new, but Munich is a beautiful city. I will try to learn German.

“The door to Real Madrid is still open, but for now I only think about the next two years here. After that we’ll see and make a decision.

“It is a new way but no step back. A new challenge.”

.@jamesdrodriguez: "I can play on the left, on the right or as a number 10. I will have to fight for my starting place." #ServusJames pic.twitter.com/tw9BXmWbe9

Bayern chief executive Karl-Heinz Rummenigge confirmed the club will be first in line to keep James, should all parties be in favour of making the switch permanent.

“We have a clear agreement with James and Real about a two-year loan,” he said.

“After that we have the option to make the deal permanent with a specific amount for three more years.”

Of Bayern’s other recruitment activity, he added: “The transfer market is open for another six weeks.

“I won’t rule out that we sign some other players nor that some players could leave. But right now, nothing specific is planned.”

Ancelotti welcomed a quality addition to the squad but made it clear the new arrival should not expect any preferential treatment when it comes to selection decisions.

“I am really happy that he is here now. We already had a good time together,” he said. “His quality will improve our squad. He is a calm person and will find his place within the team.

“He can play everywhere, it’s important to have competition within the team. He will get some breaks as well, I have no problem to bench players.”