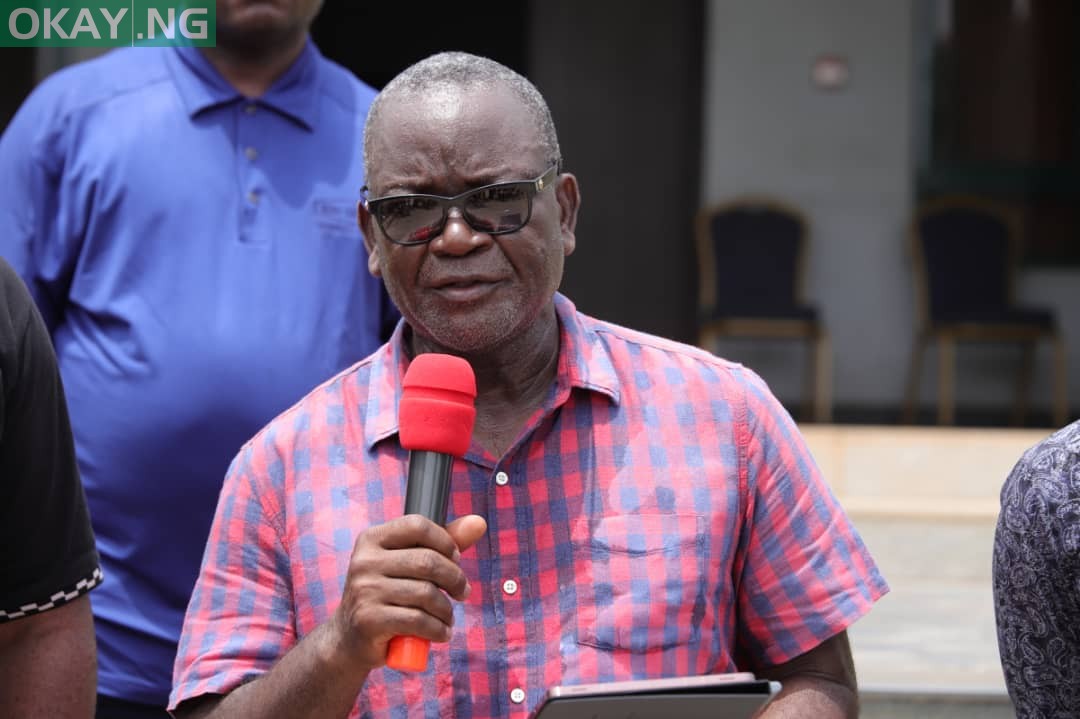 Benue State Governor Samuel Ortom has narrated how he escaped an attempt on his life by gunmen, suspected to be herdsmen, who attacked him on his farm Saturday.

The governor speaking to journalist during a press conference at the Benue Peoples House after the incident said he ran 1.5 kilometers to escape unhurt.

According to Ortom, it took the swift response of his security aides to repel the attack, while he ran a long distance to escape the attack.

He said: “You know today is Saturday and it normal as a farmer, I usually go to my farm on Saturdays. so I went to my farm along Gboko road and while trekking out of the farm on our way back, we started hearing some gunshots and we discovered people who were dressed in black and from experience, we now realized that these are Fulani militia.

“I do not want to take things for granted because a few days ago the media were awash with a statement from Miyetti Allah who met in Yola, the same place they met in 2016 where they decided that they will take Nigeria and that every other person is a slave that was when they started infiltrating the entire country.

“They came out with a statement singling me out as the only person who is creating problems for the entire Fulani race. And behind the scenes, I also heard that in the meeting, I was targeted for elimination this was the information I got. That they will go after me either in my home, farm, or wherever they get me.

“And this not the first time, I heard intelligence report before that these people said that they were going to kill my security aides and then capture me alive and gradually kill me.

“Like I always say, my life is in the hands of God not in any Fulani man or anybody whatsoever. And I still remain firm, I will fight for the truth, equity and fairness till when God permits I that will not be here again, then I will go.

“I appreciate the security personnel attached to me they were able to repel them and they could not have access to me. I thank God for my fitness to have run for more than one and a half kilometers without stopping it means that God has given me strength and I am grateful to God.

“I am not going to subject myself to intimidation by anyone whatsoever. I don’t have problems with any Fulani man or the Fulani race, but I have a problem with Fulani bandits who have vowed to take over Nigeria as their ancestral home and I say no, not when I am here as governor leading my state.

“I am not concerned about other states, any state that wants to give their land and themselves to be slaves to Fulani men I have no problem with them but in my state, I have consulted with my people and what I am doing is in line with the wishes of my people, and on that, I stand. I have not infringed on anybody’s right.

“My lawyer is here he is going to make a petition against the leadership of Miyetti Allah because they came out to target me and behind the scene, they are planning to eliminate me in my own land. If I can’t go to the farm as governor with entire security around me then who else can go to the farm. You can imagine the pains that we have here in Benue State.

“Thank God for Mr. President who responded to my letter directing that anymore illegally in possession of AK 47 should be shot at sight. I am yet to see that, let me see it happening in Benue State. I have reported this to the security agencies and I hope that this will be done so that the land will be safe for our people to go to the farm and do their work and survive and live a good life.

“We are not against Fulani people who legitimately want to do their business here including cattle rearing but you must ranch, that is the law and we are in a democratic era and democracy is anchored on the rule of law.

“I don’t know why people will come from somewhere and think that they will not obey the laws of the land. If everybody decides to be lawless, if all of us decide to take guns and go after people or our perceived enemies, there will be lawlessness, there will be anarchy and who knows what will happen.

“I want to call on Mr. President, I want to call on the security agencies to fish these people out. They are in the forest between Makurdi and Abinsi. They are living there and coming out to commit atrocities and evil, Killing our people, maim them, raping women, and destroying our farmlands.

“And anytime our Livestock Guards and security agencies go after them, they run back into the forest across the river.

“This is not fair, I am going to make a petition against the leadership of Miyetti Allah because I hold them responsible.

“I have not committed by crime, I have not done any evil against anybody. Throughout my more than 40 years of being in politics, I have not injured anyone with a pin talk more of the knife. I have not done it because that is not the way to go.

“In my pursuit for power, I have always known that power belongs to God and He giveth it to whomsoever He wills.

“So I don’t know why until today I have been calling for the arrest of these people since 2017 and they are going about their normal businesses in Abuja, in Yola, Kano, and everywhere without security personnel inviting them for questioning.

“And my pain is that these people are protected by our security personnel who are paid with our taxpayers’ money. These are security men that are inadequate because of the crisis created by Miyetti Allah and the police are still protecting them.

“Why, are we second-class citizens? I am not a second-class citizen to anyone in this country. I pay my tax just like any other person and I am law-abiding and I hope that the security agencies will question these people on why they should single me out in their Yola meeting and behind the scene giving orders for me to be eliminated. I have seen the result today. If not for the security personnel that was with me it would have been a story.

“That is it, but I am going to make a petition to the President and security agencies for the leadership of Miyetti Allah to be arrested. What they are doing is not correct and government must not fold its hands. I believe in the unity of this county, I am not against anyone and I am not fighting anyone.

“I am fighting for the rights of the people that elected me. I am fighting for justice, equity and fairness. And I cannot compromise that. The law prohibiting open grazing in Benue state can never be reviewed, I have consulted with my people and they insisted that it should never be reviewed and on that we stand. Rather if we are reviewing it, we are going to put in place more stringent conditions for instance the payment of fines on heads of cattle that are arrested.

“Come to think of it, I brought a solution to the problem that has bedeviled this country as far as the herdsmen crisis is concerned. Since 2016 I have been propagating ranching as the global best practice and that is where we are today.

“Pessimists and skeptics who never accepted it are today accepting it. People who came out openly to attacked me are today laying the same bill in their Houses of Assembly to have Ranches all over the place because that is the only solution.

“So how have I become a problem? By finding a solution to a problem that is existing and the government is not able to come out to make pronouncements or legislate to ensure that we all live in peace?/How am I a problem? Let them come and tell the whole world, let them tell me.

“I have always said that look if you disagree with me on this issue, tell me the option that is superior to the one I brought on the table. Up till today, nobody has said anything. I challenge all Nigerians and all Fulani men who are against me to come out and tell me if there is another solution to ensure peace for farmers and herdsmen as well as the people.

“Tell me so that if it is superior to providing ranches for cattle rearing then we can follow you. But if I clear to me that the issue of herdsmen in Nigeria, especially the Fulani men is just camouflage, the agenda is to take over the land and they have said. I am quoting them, it is in the media.

“They have said Nigeria is the only country that belongs to them, that they will take over and everybody will be their slave. I will not be a slave to any Fulani man. The Benue people will not be slaves. And we are not going to catch anyone to be our slaves. It should be live and let’s live. Democracy is freedom for all. Everybody should be free to express themselves and to associate with everybody and do their business.

“Recall that Governor Fayemi came out clearly and said this government has failed. Providing security is nil. Everybody is running all over the place; traditional rulers, governors politicians, and all. If I am not safe in my own state, who else is safe in Benue state. That is the question I am asking and that is the most painful aspect of it.

“There are other 10 points that are still pending but we need to address them too because if we want this country to be together and ensure peace for all, all those issues must be addressed too. All issues of kidnappings were brought here by Fulani men. Nobody should shy away and say it is bandits without calling their names.

“We shouldn’t also shy away from talking about Fulani bandits who are terrorizing everybody in the forests. They are even inviting Boko Haram to join them to create problems here for us. They have not hidden it. They have come out to say that yes, our people should settle them.

Furthermore, he said, “as I talk to you, troops of Operation Whirl Stroke are on them, the Police, DSS, and other security personnel because we had to call for reinforcement. Thank God we were able to escape unhurt,” he added.