Anidugbe Daniel popularly know by his stage name ‘Kiss Daniel’ has been dragged to court by former record label, G-Worldwide.

G-Worldwide accused Daniel of “taking steps to appoint a new manager, solicit for bookings, and has continued to negotiate and enter performance agreements in respect of the songs from the album New Era, and Evolution which is set to be released soon containing singles such as Yeba, For You, Senorita, Sofa and others, produced under the contract, including using the stage name ‘Kiss Daniel’ without the company’s prior consent and permission.” 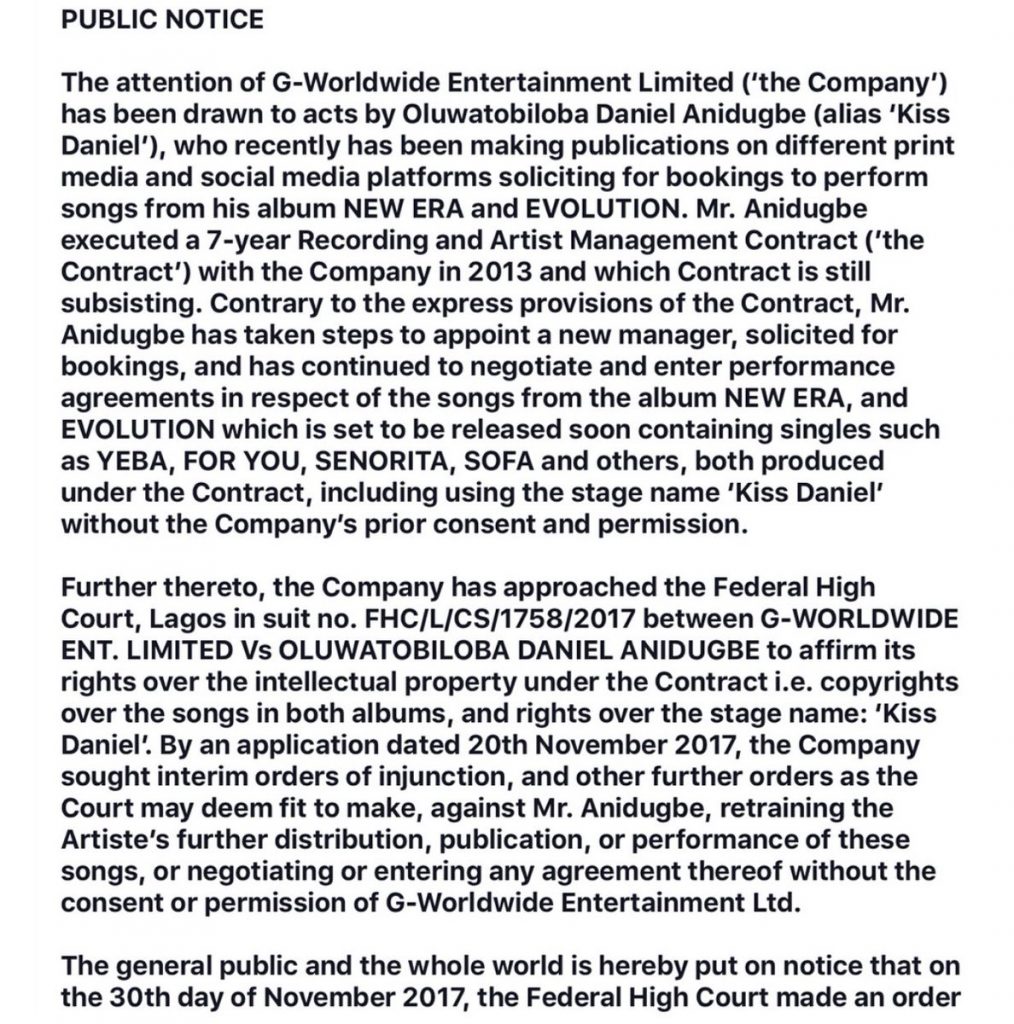 “The attention of G-Worldwide Entertainment Limited (‘the Company’) has been drawn to acts by Oluwatobiloba Daniel Anidugbe (alias ‘Kiss Daniel’), who recently has been making publications on different print media and social media platforms soliciting for bookings to perform songs from his album NEW ERA and EVOLUTION. Mr. Anidugbe executed a 7-year Recording and Artist Management Contract (’the Contract’) with the Company in 2013 and which Contract is still subsisting.

“Contrary to the express provisions of the Contract, Mr. Anidugbe has taken steps to appoint a new manager, solicited for bookings, and has continued to negotiate and enter performance agreements in respect of the songs from the album NEW ERA, and EVOLUTION which is set to be released soon containing singles such as YEBA, FOR YOU, SENORITA, SOFA and others, both produced under the Contract, including using the stage name ‘Kiss Daniel’ without the Company’s prior consent and permission.

Further thereto, the Company has approached the Federal High Court, Lagos in suit no. FHC/L/CS/1758/2017 between G-WORLDWIDE ENT. LIMITED Vs OLUWATOBILOBA DANIEL ANIDUGBE to affirm its rights over the intellectual property under the Contract i.e. copyrights over the songs in both albums, and rights over the stage name: ‘Kiss Daniel’.

By an application dated 20th November 2017, the Company sought interim orders of injunction, and other further orders as the Court may deem fit to make, against Mr. Anidugbe, retraining the Artiste’s further distribution, publication, or performance of these songs, or negotiating or entering any agreement thereof without the consent or permission of G-Worldwide Entertainment Ltd.

The general public and the whole world is hereby put on notice that on the 30th day of November 2017, the Federal High Court made an order that status quo ante bellum under the Contract, be maintained by the parties, pending the hearing and determination of the motion on notice filed in the suit.

The import of the Order being that the state under which the parties existed under the Contract should be preserved until the Court makes a determination of the motion on notice filed by the Company. All and any dealings in respect of the upload, distribution, and or performance of any of the songs, as well as the use or exploitation of the name ‘Kiss Daniel’ can therefore only be entered or made with the prior written consent and permission of the Company as provided under the Contract.

The general public and the whole world is further cautioned that as the matter is now before a Court of law (subjudice), and following the Order to maintain status quo, any unauthorized upload, distribution, exploitation, performance, sales, and use of the songs (from the NEW ERA and EVOLUTION albums), or stage name ‘Kiss Daniel’, in any show, event, downloading or streaming platform, will be in violation of the Order of the Federal High Court.

Anyone who does or continues to do so shall be liable as an accomplice for contempt of court, and the full weight of the law will be brought against that person as a contemnor.

Any person or organization who negotiates, or enters into any agreement with Mr. Anidugbe to engage him on the basis of his presumed rights over the songs in both albums, or the use of the stage name ‘Kiss Daniel’, does so at his or her own risk and peril.”