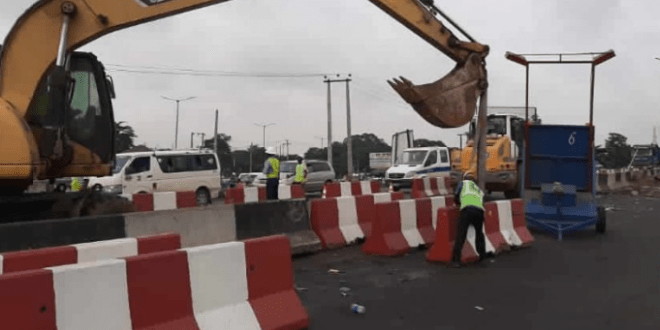 The federal government has announced diversion of traffic for the continuation of works on the 600-metre Kara Bridge section on the Lagos outbound corridor of the Lagos-Ibadan Expressway.

The works will commence Tuesday after a suspension in November to ease traffic flow.

Kayode Ibrahim, Federal Ministry of Works and Housing engineer supervising the project, announced the resumption of works in Lagos on Sunday.

According to Ibrahim, the decision was reached after a meeting of the relevant stakeholders.

“All the stakeholders are involved in reaching this decision. They are: the Federal Roads Safety Corps (FRSC) and the Lagos State Traffic Management Authority (LASTMA).

“Others include the Ogun State Traffic Compliance and Enforcement Corps (TRACE), the Police, Julius Berger Construction Plc., and the Federal Ministry of Works and Housing.

“We have been working together and we are on ground to minimise gridlock. It is nothing special, it is just a normal diversion.

“FRSC and Julius Berger have their tow trucks deployed, sometimes when we need NEMA and Fire Service we call them and they quickly respond to our calls.”