Facebook is expanding one of its newer features designed to help mobile users find accessible Wi-Fi networks. The company had begun testing a “Find Wi-Fi” option last year on mobile, which highlighted free, public Wi-Fi networks nearby. At the time, the option was only available on iOS in select countries, as something of a test. Today, Facebook announced users worldwide on both iOS and Android devices will soon gain access to “Find Wi-Fi.”

The company explains the addition is useful for those times when you’re traveling, but especially so when you’re in an area where cellular data is “scarce,” it says.

In developed markets like the U.S., that could mean more remote, rural locations, but in emerging markets, it’s an even more powerful tool as users often have limited data plans, and spotty cellular coverage in general.

The feature, like other new additions to Facebook’s portal, is found under the “More” tab in the Facebook mobile app. Once you locate the “Find Wi-Fi” tab, Facebook notes you may need to turn it on. Afterwards, Facebook will display a map showing the closest hotspots, as well as details about the businesses that provide them. 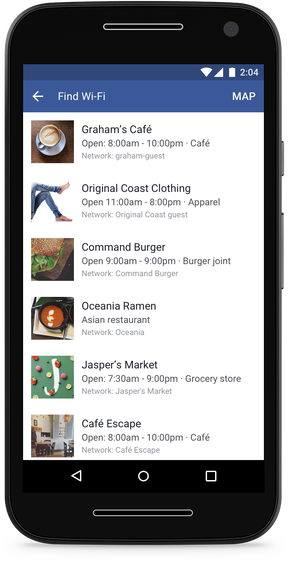 Besides being a handy addition that helps Facebook’s now 2 billion monthly users stay connected to the network and spend more time in its app – something that directly impacts Facebook’s bottom line – the tool also serves as another way to discover local businesses. That means users might start turning to Facebook to find the closest coffee shop with Wi-Fi, instead of Google Maps.

But the feature isn’t as of yet as reliable as it should be, we found – though it easily picked up Wi-Fi hotspots at nearby restaurants and malls, for example, it didn’t include the closest Starbucks or McDonald’s in our list of suggestions. (Your mileage may vary.)

This is because, for the feature to work, a business must first claim their Wi-Fi network by navigating to their “Edit Page Info” on their Facebook Page. Or, more simply put, it’s an opt-in setting. That being said, the feature has seen good adoption during the tests starting last year. And now that businesses know it’s a globally available feature, that adoption may increase. 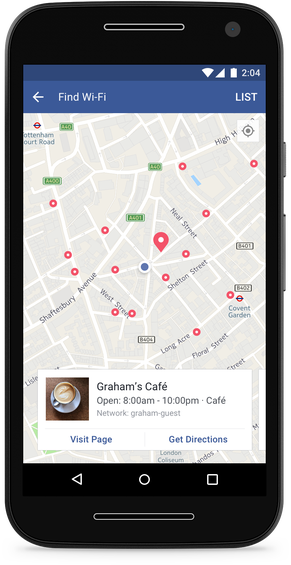 A tool for listing Wi-Fi networks is hardly Facebook’s only effort with regard to helping users with mobile connectivity. The company has much larger projects underway in this area, including efforts via its Internet.org arm to expand mobile connectivity in emerging markets, infrastructure investments around the world, plans to use solar-powered dronesfor delivering connectivity and more.

Facebook says “Find Wi-Fi” is beginning to roll out globally on iPhone and Android.