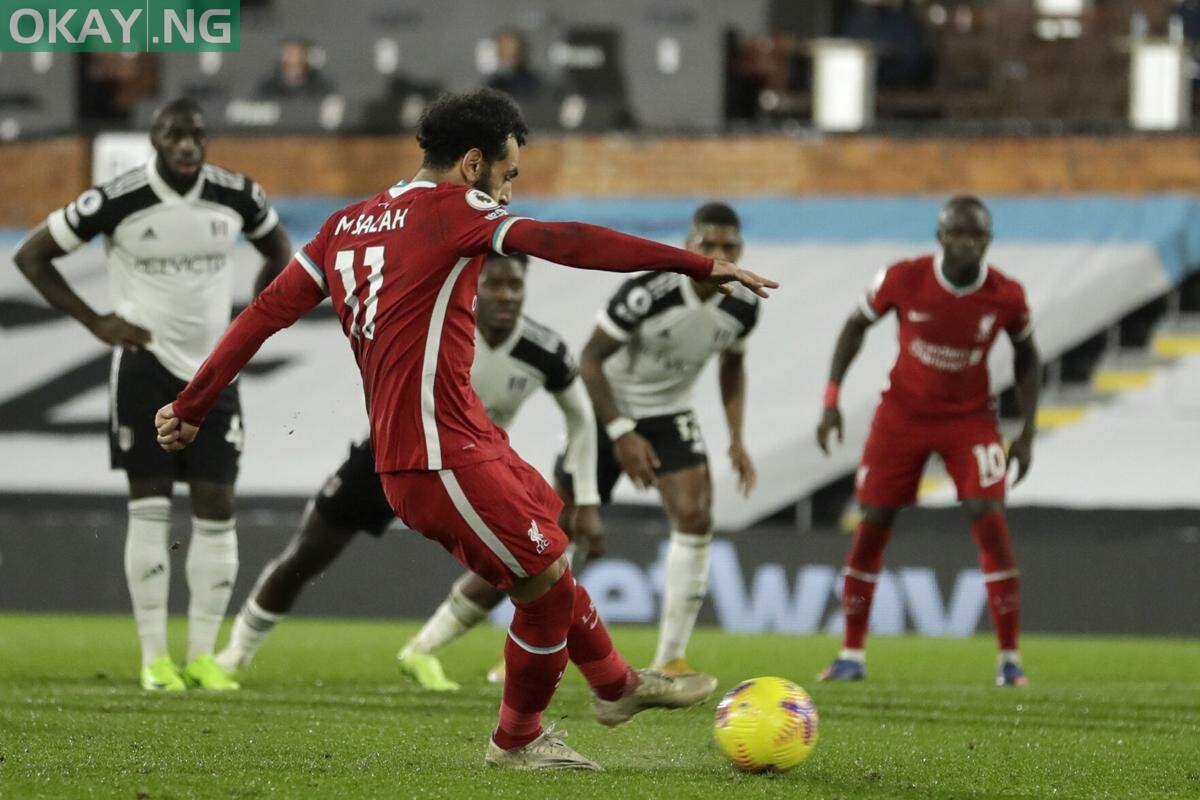 Jurgen Klopp’s side were punished for a sloppy first half display at Craven Cottage when Bobby Decordova-Reid gave Fulham a shock lead.

Liverpool remain in second place and sit behind leaders Tottenham on goal difference.

Crystal Palace’s late equaliser in their 1-1 draw against Tottenham just before Liverpool kicked off had given the Reds a chance to go top if they won in west London.

Instead, they will have to wait until Wednesday’s summit meeting with Tottenham at Anfield for their next chance to knock Jose Mourinho’s team out of pole position.

Liverpool are unbeaten in their last eight league games, but they were far from their fluent best and are winless in their past five away league matches.

Adding to Klopp’s concerns, Joel Matip suffered a back injury that saw him join the long list of Liverpool injuries which already included his fellow centre-backs Virgil van Dijk and Joe Gomez.

Klopp’s pre-match admission that Diogo Jota will be sidelined for up to eight weeks with a knee injury leaves the Reds boss relying on Salah, Roberto Firmino and Sadio Mane to lead the attack throughout the hectic Christmas and New Year period.

Fulham have just two wins in their last 11 games in all competitions, but this spirited effort showed Scott Parker’s fourth bottom side are capable of avoiding relegation.

Klopp had warned his players not to underestimate Fulham as they look ahead to the Tottenham game, but their erratic performance suggested they hadn’t been listening closely.

With coronavirus restrictions eased in London, it was the first time Fulham had been able to have fans in their stadium since last season’s promotion.

Ivan Cavaleiro almost gave those 2,000 supporters the perfect welcome back when his stinging strike was parried away by Liverpool keeper Alisson Becker in the fourth minute.

Cavaleiro threatened again when his well-timed run beat the Liverpool offside trap, but his low shot was superbly saved by Alisson.

Liverpool had a penalty scare when Fabinho’s sliding challenge on Cavaleiro went to a VAR review, but referee Andre Marriner opted not to award a spot-kick after consulting the pitchside monitor.

Fulham were frustrated by that decision but they kept up the pressure and Ademola Lookman’s 20-yard drive forced another good save from Alisson.

Even Alisson had no answer when Fulham finally got the goal their dominance deserved in the 25th minute.

Salah surrendered possession after a shove on the Egyptian went unpunished on the edge of the Liverpool area.

Lookman clipped the ball through to Decordova-Reid and the winger smashed an unstoppable strike past Alisson into the far corner.

Mane should have done better than head wastefully over from Curtis Jones’ cross before Salah swivelled to fire just wide from close-range.

Matip’s back injury forced the Liverpool defender off at half-time, with Japan forward Takumi Minamino sent on and midfielder Jordan Henderson moving to centre-back.

Cavaleiro got through Liverpool’s reshuffled rearguard with ease after a mistake by Andrew Robertson, forcing Alisson to save his prodded effort.

With Fulham defending deeper as the half wore on, Henderson was able to get forward and he drew a fine save from Alphonse Areola after running onto Firmino’s pass.

Liverpool dominated the closing stages and equalised in the 79th minute when Kamara blocked Georginio Wijnaldum’s free-kick with his arm.

Salah’s penalty wasn’t well struck, but it still crept under Areola’s weak attempted save for his 13th goal of the season.