A suit filed by Spectrum Wireless Communications Limited to challenge the sale of 9mobile to Emerging Markets Telecommunications Services (EMTS) has been dismissed during a Federal High Court sitting on Wednesday in Ikoyi, Lagos.

Justice Chukwujekwu Aneke, the presiding judge of the case, delivering the ruling held that there was no direct shareholding relationship between Spectrum Wireless and EMTS to vest on Spectrum the right to sue EMTS to protect its alleged shareholding.

He then approved the defendant’s position that Spectrum is not a shareholder in EMTS and cannot be directly affected by the actions of its shareholders – Mubadala Holdings Cyprus Ltd, Myacynth Coperative UA and Etisalat International Nigeria Ltd.

The court further upheld the defendant’s argument that if at all Spectrum has a right of action, it should be against Premium Telecommunications Holdings NV (PTHNV), the company it originally invested in, and not EMTS.

The presiding jude, therefore, upheld the submission of counsel to EMTS that not being a shareholder of EMTS, Spectrum lacked the locus standi (legal right) to bring the suit against EMTS on the basis of any decision taken by shareholders of EMTS.

Aneke also that Spectrum is not a party to the credit facilities which it claims were unlawfully obtained; and it is elementary law that only parties to a contract can make judicial claims in respect thereof.

The judge therefore dismissed the suit in its entirety. 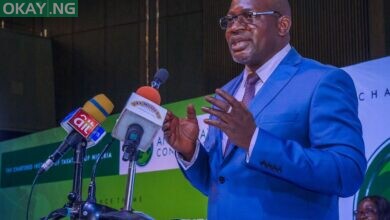