Justice Agatha A. Okeke of the Federal High Court sitting in Lafia, Nasarawa State have convicted and sentenced four suspected members of an oil syndicate Olusegun Gbenga, Yusuf Muhammed, Abass Auwal and Olanipekun Olagoke to 10years imprisonment on each of the 12-count charge of oil theft preferred against them by the Economic and Financial Crimes Commission, EFCC. 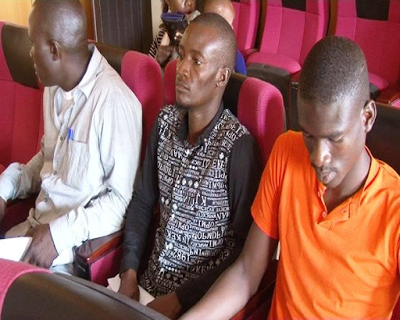 One of the counts reads:

“That you, Olusegun Gbenga, Yusuf Muhammed, Abass Auwal and Olanipekun Olagoke on the 12th day of May, 2014 at Toto Military check point in Nasarawa State, within the jurisdiction of the Federal High Court, did without lawful authority or an appropriate licence, deal in crude oil and you thereby committed an offence contrary to and punishable under Section 1 (17) (a) (b) of the Miscellaneous Offences Act, CAP M17, Laws of the Federation of Nigeria, 2004”.

The convicts, on arraignment pleaded not guilty, but upon diligent prosecution by the EFCC, they were found guilty and sentenced. Prosecution counsel, Salisu Majidadi, citing Section 1 (17) (a) (b) of the Miscellaneous Offences Act, CAP M17, Laws of the Federation of Nigeria, 2004, drew the attention of the court to the fact that:

“The vehicle that was used in conveying the crude oil should automatically be forfeited to the Federal Government.”

In view of this argument, Justice Okeke, who had earlier wanted the EFCC to formally apply to the court for the forfeiture of the products, thereafter, ordered the EFCC to evacuate the crude oil and return same to the NNPC, while the truck be forfeited to the Federal Government. The sentences are to run concurrently.