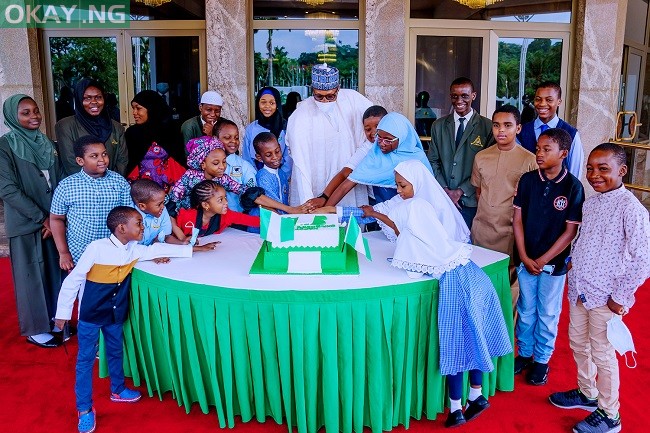 President Muhammadu Buhari has promised a better nation for the present and future generations.

Buhari, in a statement by his spokesman, Garba Shehu, spoke at the State House, Abuja while hosting some children as part of activities to mark this year’s Children’s Day.

The statement reads: “President Muhammadu Buhari, on Thursday, celebrated Children’s Day with a solemn promise to bequeath a better country for the present and future generations.

“As part of the activities to commemorate Children’s Day, observed on May 27, the President hosted a group of Nigerian children at the State House.

“The short ceremony witnessed the cutting of a ‘national cake’, a guided tour of the President’s office, meeting rooms, banquet hall and the zoo at the Presidential Villa.

“Describing children as precious blessings who should be nurtured to carry the burden of the society in the future, President Buhari, after spending a memorable time with his august visitors, bid them farewell, saying: ‘Bye-bye, see you next year.’

“The President also received a second group of children visiting from Borno State and had a group photo with them and the Vice President, Prof. Yemi Osinbajo, who had brought them to meet the President in his office.”