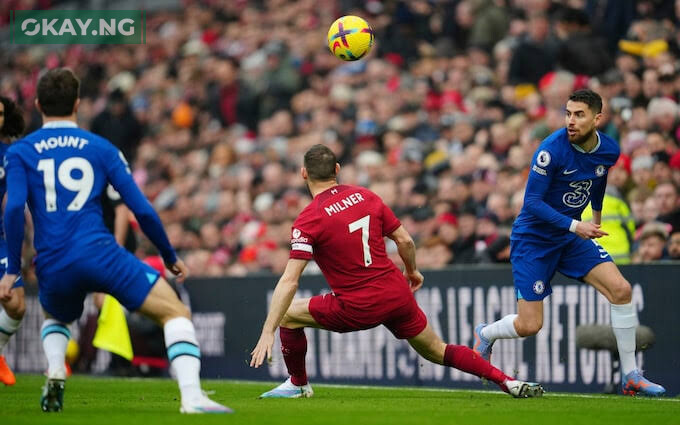 The 193rd meeting between Liverpool and Chelsea ended stalemate at the Anfield Stadium in Liverpool.

Forward Kai Havertz saw an early goal ruled out by VAR as Chelsea and Liverpool played out a goalless draw at Anfield on Saturday.

Havertz thought he had put his side in front, tapping in a rebound after Thiago Silva’s shot hit the post, but was deemed to have been offside when Silva took his shot by a VAR review.

On Jurgen Klopp’s 1,000th game in management, Liverpool seemed shorn of confidence as they looked to avoid three straight league defeats, only creating half chances with new signing Cody Gakpo missing the best of them in the first half.

The visitors introduced big-money January signing Mykhailo Mudryk in the second half but, while he looked lively, the Ukraine international was unable to lift his side, who earned a point that leaves them 10th, level on 29 points with Liverpool in eighth.

Both sides are nine points off the top four with Chelsea having played 20 games to Liverpool’s 19.

“I thought the performance was good,” Chelsea boss Graham Potter told BT Sport. “I am happy with the team, the energy, what we tried to do.

“At Anfield, it is always tough. It is a clean sheet and a point, we move forward. Overall, a positive day, apart from the fact we wanted three points.”

Chelsea still should have gone into the break in front but another January arrival, defender Benoit Badiashile, headed too close to goalkeeper Alisson from close range.

“You know this is going to be a tough place to come. Overall, we controlled a lot of it … We could have taken our chances,” Chelsea midfielder Mason Mount said after the match.

“It has been tough lately, we want to win games. I feel like it is getting better and we are working hard today. We’ll definitely take this today. The final passes weren’t there, if it was maybe we score a few first half, but as I said, this is a tough place to come. They press you and force mistakes, like the second half and I think we came through that.”

Liverpool found some opportunities through winger Gakpo and forward Darwin Nunez, but neither side were able to find the back of the net.

Liverpool have failed to win any of their last three Premier League games, while it is the first time they have failed to score in consecutive games in the competition since March 2021 against Fulham and Chelsea.

“It was tough. It was two teams that aren’t playing their best at the moment … We had really good spells in the game as well. There’s things to work on but a clean sheet is a step in the right direction,” Liverpool defender James Milner said.

“When you’re in a tough period and a tough moment in the team, I think it’s important that you stick together and fight for those clean sheets and that’s where it starts.

“It’s not the best football matches that we are playing but it’s small steps to get where we know we can be … This is a small step in the right direction but we have got a long way to go to where we want to be.”