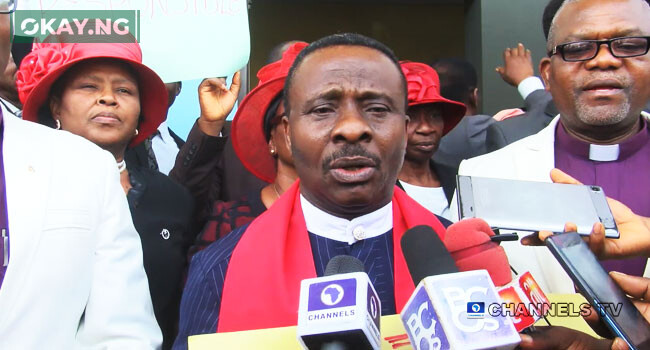 The Christian Association of Nigeria (CAN) on Thursday in Enugu expressed worries about renewed killings in the country.

The Christian Association of Nigeria (CAN) on Thursday in Enugu expressed worries about renewed killings in the country. It said it would continue to engage governments at all levels to ensure that the killings were curtailed.

Okay.ng obtained that CAN National President, Rev. Daniel Okoh, expressed the worries at the 31st General Assembly and Standing Committee of the Christian Council of Nigeria (CCN).

Reacting to recent attacks at Eha-Amufu, Enugu State, by assailants, the CAN president charged that federal and state governments were failing in their responsibility of securing lives and property of Nigerians.

“I want to tell you that CAN has not relented in its call to the Federal Government and the security agencies to be alive to their responsibilities to defend citizens and the territorial integrity of the country.

“We have been talking to the security agencies; we have been raising our prophetic voice and we hope that those in charge will listen.

“We will continue, not only just to talk to them openly, but will engage them in conversation, and we pray that within a short time, God will answer our prayers.

“It is a collective responsibility, not just the responsibility of the government alone to know, see and fish out certain movements that are suspicious and report same to the authorities,’’ he said.

On the 2023 general elections, Okoh advised the electorate to vote for a presidential candidate who has the capacity to tackle the economic and security problems facing the country.

The CAN president stressed that the Church would not endorse any candidate or political party ahead of the elections.

He added that the Church would rather engage all presidential candidates to remind them of the enormity of the responsibility of the office.

In his remarks, President of CCN, Most. Rev. Benebo Fubare-Manuel, said aside the 31st General Assembly, the event provided the Council the opportunity to celebrate its 93rd year of formation.

Fubare-Manuel stressed that the Council had contributed significantly to strengthening and uniting the Christian community as well as spearheaded the formation of CAN.

The CCN president urged Christian bodies to always speak with one voice, especially as it pertains to the political, economic and security situations in the nation, to avoid being taken for granted

Nebo condemned tribal and religious bigotry and asked voters to participate actively in the 2023 general elections.