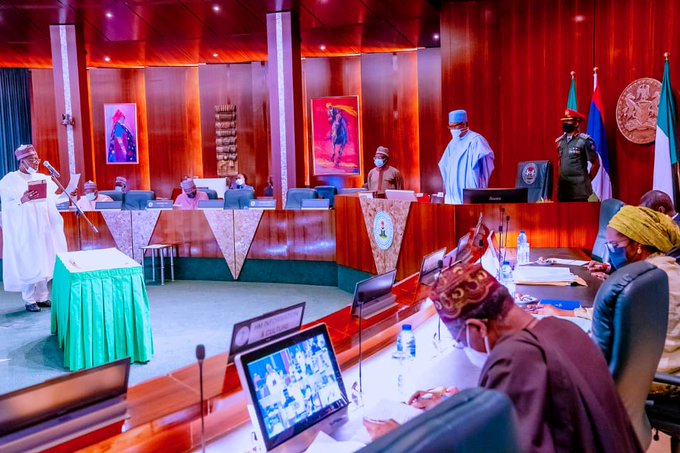 President Muhammadu Buhari on Wednesday sworn in Mohammed Bello as the new chairman of the Revenue Mobilisation Allocation and Fiscal Commission (RMAFC).

Bello, who is the former secretary of the commission, was sworn in before the commencement of the federal executive council (FEC) meeting at the State House in Abuja.

Speaking to journalists after the ceremony, Bello said the commission would assist the Buhari-led administration to generate more revenue and block leakages.

“The task is challenging. We all know the situation that Nigeria is, or even globally when you look at contemporary African countries like South Africa, Ethiopia, Ghana, Egypt, all the economic issues that are facing including Nigeria,” Bello said.

“We had the COVID-19, we had a recession, we now have the war with Ukraine, which has affected many countries and revenues are down all over.

“So our task, as revenue mobilisation is how we can assist the President, to get more revenue for the federation and block leakages.

“Looking at the constitutional responsibility of the commission, which of course are, monitoring of accruals to federation account and disbursement, and also monetisation, taking care of the salaries of political office holders, and judicial officers, as enshrined in the constitution that had not been reviewed since 2008. And I think there is agitation for that.

“And also, from time to time, come up with a new revenue allocation formula, which the commission successfully did, sometimes I think, in February this year, and we have submitted our report to President.

“What he stated at that time was that he was waiting to see what the national assembly will do in terms of looking at the concurrent list and exclusive list and constitutional amendment.

“If he’s satisfied with what the national assembly does, he will forward a recommendation and make it an act so that it becomes a law.

“Revenue allocation formula has not been touched for about 29 years. The constitution says after a period of five years it can be reviewed, looking at the circumstances of the country as more states have been created.”