The British Broadcasting Corporation (BBC) has apologised to the Emir of Kano, Muhammadu Sanusi II, over claims that he was under probe by anti-graft officials for alleged mismanagement of Kano Emirate fund.

Jamie Angus, editorial director at BBC, tendered an apology letter to Sanusi over an April 24 story that said the traditional ruler was amongst those being investigated in connection to alleged misappropriation of about N6 billion Emirate Council fund.

Angus has come out to say that the report is not correct.

He explained that the station’s editorial staff in Abuja had inaccurately translated an April 24 interview with Muhyi Magaji, the chairman of Kano state Public Complaints and Anti-Corruption Commission, who allegedly said that Sanusi was under investigation. 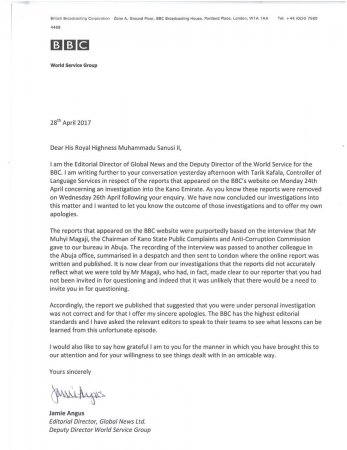 “The recording of the interview was passed to another colleague in Abuja office, summarised in a despatch and then sent to London where the online report was written and published.

“It is now clear from our investigations that the reports did not accurately reflect what we were told by Magaji, who had, in fact, made clear to our reporter that you had not been invited in for questioning and indeed that it was unlikely that there would be a need to invite you for question.

“Accordingly, the report we published suggested that you were under personal investigation was not correct and for that I offer my sincere apologies”, he wrote.

In the apology letter, dated April 28, 2017, Angus said the BBC has removed the inaccurate interview from its website on April 26.