A man has been shot in the leg and arrested because he was unable to load £185,000 of stolen cash onto his motorbike during a bank robbery getaway.

According to Sky news, CCTV footage shows the man in Huludao, China, trying to load the bag of cash weighing 13 stone onto the back of his motorbike after holding up a security guard at gunpoint.

However, he visibly struggles to carry and lift the bag – which contained 1.77million Chinese Yuan

The robber, who was not named, ambused a security guard who was carrying the bag of cash through the bank’s revolving doors

Using a replica gun, he scared the guard away before taking the bag and starting to drag it across the carpark to a waiting motorbike.

However, he was struggling to even lift the bag and balance it on top of the fragile-looking motorbike.

It is then he was surrounded by police, shot in the leg and arrested.He later told police: ‘

I hate myself for doing that. How could I do such a thing?’I will treat my parents and my wife kindly if one day I’m let out of prison.’ 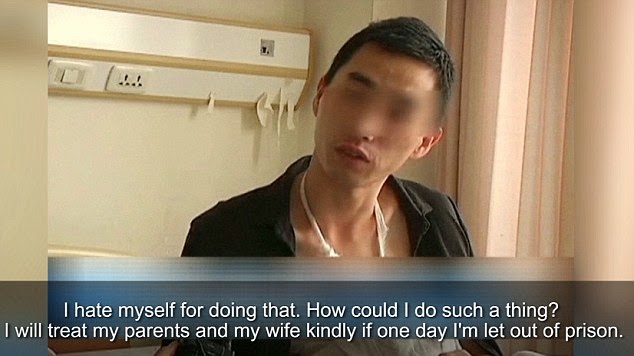