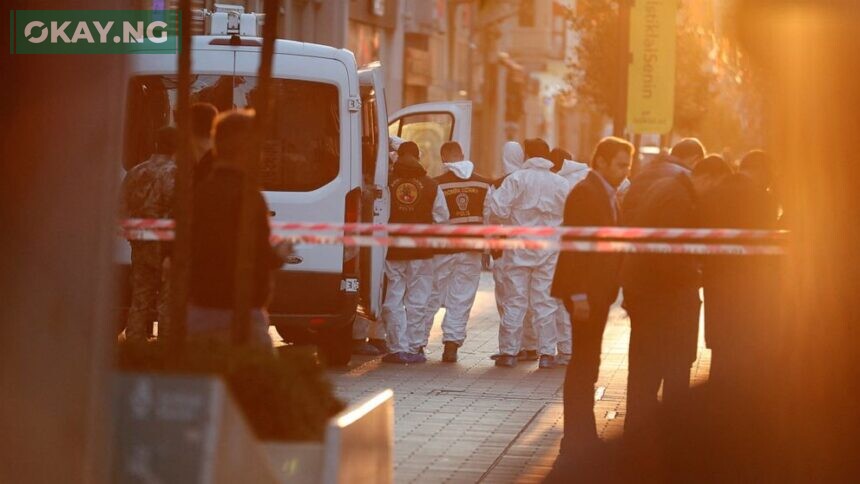 ISTANBUL: According to Turkish President Recep Tayyip Erdogan, an explosion on Istanbul’s Istiklal Avenue on Sunday resulted in at least six fatalities and 53 injuries.

Before departing for Indonesia to attend the 17th G20 meeting, he spoke at a news conference and said that preliminary information from the city’s governor suggested that the explosion may have been a suspected act of terrorism.

Initial evidence also suggests that a lady was involved in the explosion, he added, promising that all of the criminals would be brought to justice.

The president said, “Efforts to grab control of Türkiye and the Turkish nation through terrorism will not succeed.

The blast happened around 4.20 p.m. local time, according to Istanbul Governor Ali Yerlikaya, who earlier said that police and emergency personnel were called to the scene.

The explosion’s origin was not immediately apparent.

The crowded Istiklal Avenue scene, which police soon sealed off, saw a flood of ambulances. The area, in Turkey’s largest city’s Beyoglu neighborhood, had been packed during the weekend with shoppers, visitors, and families as normal.

Several ambulances and a chopper were reportedly present, according to reports.

Local media reported that the Istanbul Chief Public Prosecutor’s Office has opened an investigation into the blast and that crime inspectors were also there.

Although the explosion’s cause is unknown, Kurdish separatists, Islamist militants, and other groups have previously targeted Istanbul and other Turkish cities.

Istiklal avenue was hit during a series of attacks against Istanbul in 2015-2016 claimed by the Dai’sh.

Prime Minister Shehbaz Sharif offered grief for the loss of precious lives on the behalf of people and government of Pakistan.

He posted on his official Twitter account, “I have learned with tremendous pain about the explosion at popular Istiklal road in the center of Istanbul.”

The government and people of Pakistan convey their sincere condolences to the brotherly Turkiye people for the loss of precious lives as well as prayers for the quick recovery of the injured, he added.

The explosion was also condemned by President Arif Alvi.