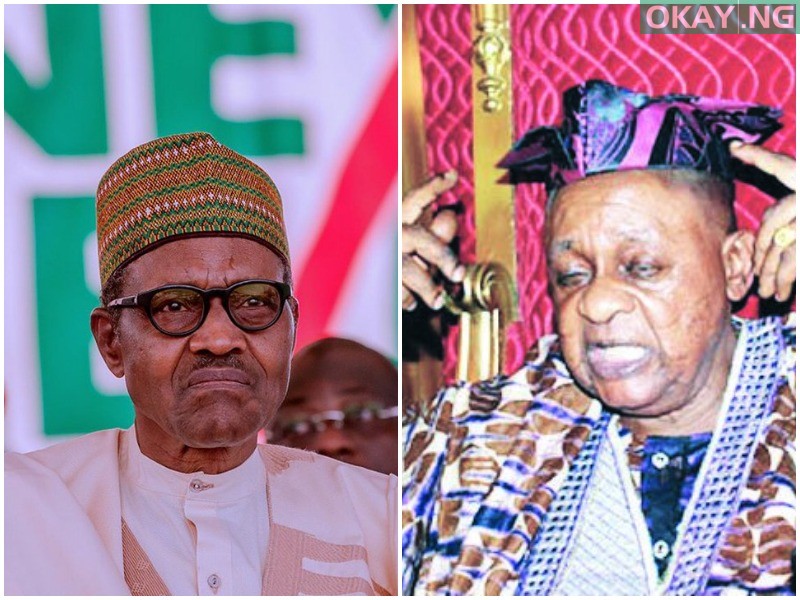 The Alaafin of Oyo, Oba Lamidi Olayiwola Adeyemi III, has written a letter to President Muhammadu Buhari over the issue of insecurity in the country.

The monarch in the letter issued on Sunday, said the people are fast losing their patience and may resort to self-help to protect their lives and properties.

Adeyemi said the herdsmen, who sometimes carry out their criminal activities in military uniform, have created a climate of fear and uncertainty in Yoruba land.

He said the situation calls for emergency action as some herders have continued to destroy crops, kidnap people and violate women in the presence of their husbands.

“In Yoruba land, we are scared and worried about the outrageous audacity and effrontery of these criminal elements in carrying out their activities and without any challenge by security operatives,” the letter read in part.

“Apart from massive destruction of farms and crops planted on them, the new wave of Fulani, pretending and disguising as herders have unleashed a reign of terror on Yoruba land. They destroy crops, they kidnap men and women, violate and rape our women, right in the presence of their husbands.

“What this portends is definitely more than the simplistic interpretation of farmers/herders’ clash but the deliberate acts of hostility and criminality.

“What makes it worrisome is the fact that for reasons best known to the police establishment, they have not been apprehending or pretend to be in the defence of victims.

“There is always a tendency to blame the victims and demonstrate helplessness in apprehending and bringing perpetrators to book to face the full wrath of the law.

“It is even said, Mr President that these criminal pseudo herders go about their nefarious activities in broad daylight and many times in military uniform. They carry sophisticated weapons, the likes of which are only available to state actors.

“This is a serious national emergency, when Fulani herdsmen are engaged in criminality all over the country and the sitting federal government seems helpless and generally unperturbed by what is going on in the security organisations.”

He lamented the inability of security operatives to make major arrests and bring those involved to book.

“There is no doubt that some leaders of these security organisations are either incompetent or bankrupt of ideas. Some are even compromised to take any decisive actions against criminals,” he said.

“What we are witnessing in Nigeria is an anomaly because it is inconceivable that in the 21st century, when the whole world is making appreciable progress in providing enhanced standard of living, Nigerians will be living under the fear of banditry, brigandage, rape, kidnapping and terrorism.

“I trust that you will not allow this to happen and will quickly and decisively take immediate steps to re-establish confidence in your government and demonstrate the capacity of the state to protect all legitimate interests.”