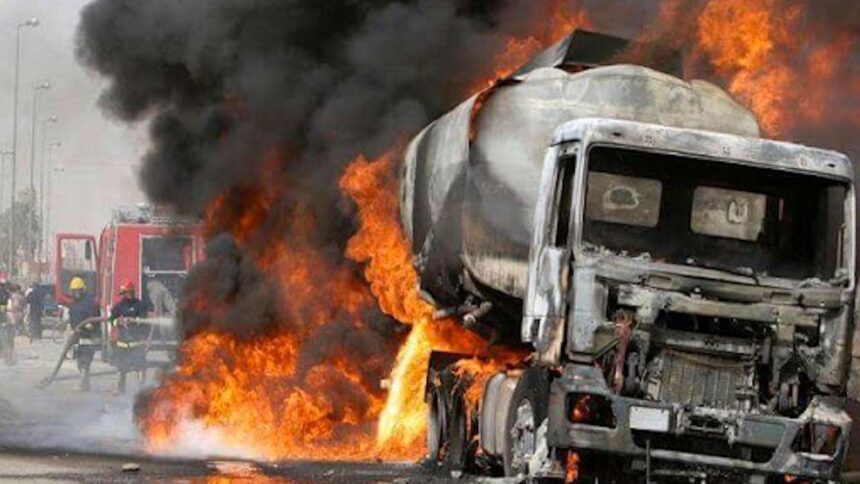 According to reports, a truck carrying gasoline exploded near the Ilo Awela axis, Sango Tollgate, on the Lagos-Abeokuta Expressway, killing two people and injuring three more.

Additionally, it was reported that the explosion, which happened early on Thursday morning, claimed at least 12 vehicles.

It was believed that the tanker toppled and caught fire as it was climbing the Ilo Awela slope next to the motorway.

The event was reported to news crews in Abeokuta by Florence Okpe, spokesman for the Federal Road Safety Corps (FRSC), Ogun State Command.

She stated that the tanker was ascending when the vehicle rolled back and became hooked, causing the liquid to leak and starting a fire, which was the alleged mechanical cause of the collision.

She stated, “On Thursday at around 1:30 am, FRSC carried out a rescue operation involving a tanker carrying PMS (petrol) while ascending Ilo Awela slope adjacent to Abeokuta-Lagos section of the expressway.

It dropped and caught fire. The area was quickly roped off and men from the fire department were dispatched to help.

Twelve vehicles—including three luxurious buses, four tricycles, three motorcycles, one yellow bus, and a tanker—were all involved as of 4:05 am.

Three people—two men and one woman—were seriously burned—and were rescued and taken to Ota General Hospital.

Two completely burned-out bodies have been removed from the scene.