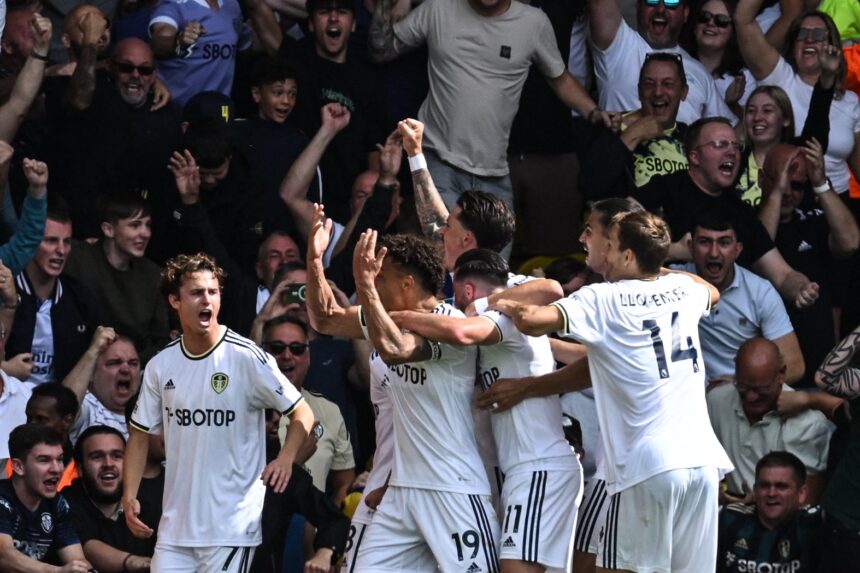 Chelsea lost their third game of the season to Leeds United at Elland Road on Sunday.

Okay.ng has learned that The Peacocks last defeated The Blues in 2001, 21 years ago.

Leeds United put in a stunning display at Elland Road on Sunday afternoon against Chelsea in the Premier League, to claim a more than deserved three points in the sunshine.

The crowd were electric throughout the match and none more so in the moments of celebration, as they saw goals from Brenden Aaronson, Rodrigo and Jack Harrison to continue the unbeaten start to the 2022/23 campaign.

A quick start to the match saw an already raucous atmosphere ramped up further, with chances at either end inside the first few minutes. Firstly, Raheem Sterling cut in from the wing and curled just wide, whilst Harrison and Dan James both had efforts off target at the other end.

Aaronson was seeing plenty of the ball early on and after superbly turning Chelsea’s Kalidou Koulibaly, he was pulled down and the visiting defender was awarded the first yellow card of the match, with 85 minutes remaining.

The Whites put early pressure on the Chelsea goal but the away side responded well after holding firm. Sterling did find the net this time with a neat finish, but the flag was correctly up for offside.

Chances were continuing to be exchanged and Rodrigo was looking to build on his good start tot the season, flashing a shot just wide. Moments after, Mason Mount forced a good save from Illan Meslier as he struck from the edge of the box.

Aaronson was continuing to cause problems to the away side, as they were unable to cope with his movement and quick feet. After skipping through challenges over the halfway line, he played in Rodrigo again, with the forward forcing Edouard Mendy to save well.

On 33 minutes, Elland Road erupted as the Whites took the lead. Chelsea’s ‘keeper, Mendy had plenty of time to deal with the ball at the back but Aaronson pressed and forced him into a mistake, before stealing the ball and then firing home to put Leeds ahead!

Just four minutes later, one became two, and the noise could truly be heard from West Yorkshire to West London as Elland Road celebrated again! Jack Harrison whipped a free-kick into the box and at the front-post, Rodrigo was there to flick a header into the far corner to get his fourth of the season!

The Whites continued to roared on until the interval and were in control of the match, heavily influenced by both Tyler Adams and Marc Roca in central midfield who were winning the ball back and breaking up attacks. Marsch’s side were correctly applauded off, when the whistle went to end the first 45 minutes.

The second half got underway as both teams emerged from the tunnel unchanged. Marsch’s side had a two-goal lead which had been well earned from the first 45 minutes, but they wouldn’t sit back and look to protect it.

Opportunities were coming on the break for Leeds, with Dan James using his blistering pace to break down the wing. His back-post cross was timed perfectly for Rodrigo, but the Spaniard was denied a second of the game by a Chelsea block.

In what had been an entertaining match full of chances, Chelsea went close once again. Conor Gallagher created space for himself to shoot left-footed in the box, and via a deflection, his effort went just past the past the post.

Marsch made his first change of the game on the hour mark. Adam Forshaw came on for the hard-working Roca in a straight swap at the heart of the midfield, with 30 minutes remaining. Chelsea’s response was to bring on Christian Pulisic and Hakim Ziyech.

Meslier was forced into action with 25 minutes to go, pulling off two much-needed and excellent saves in the space of 30 seconds. Reece James thundered an effort at goal which the ‘keeper did well to tip wide of the post, before then saving Koulibaly’s header from the following corner.

Having responded well to the Chelsea pressure, the Whites raced up the other end and scored a superbly worked third goal! James had used his pace to break free before crossing into the box and finding Rodrigo, who teed the ball up for Harrison to fire home at close range!

After the goal, James was serenaded and applauded off the pitch for his contribution, with Luis Sinisterra coming on his place for his home debut.

Into the final 10 minutes and without any further incident of note since the third goal, Sam Greenwood, Joe Gelhardt and Mateusz Klich were all introduced for the final part of the match. Making way to more well-deserved standing ovations were the goalscoring trio of Harrison, Aaronson and Rodrigo!

Straight into the action, Klich and Gelhardt combined and look to get in on goal. However, Koulibaly pulled Gelhardt down and in doing so, collected his second yellow of the match and was sent-off meaning Chelsea were down to 10 players.

The vast majority of the 36,372 strong crowd inside Elland Road were left to sing and celebrate in the final few minutes, as Leeds United secured an excellent and thoroughly deserved three points in the Yorkshire sun.