The National Drug Law Enforcement Agency, NDLEA, says it has intercepted no fewer than 442 parcels of Crystal Methamphetamine at the Murtala Muhammed International Airport, Ikeja Lagos.

This is contained in a statement by the NDLEA spokesman, Femi Babafemi on Sunday in Abuja.

Mr Babafemi said that the drugs were concealed in heads of fishes packed in cartons for export to Dubai, the United Arab Emirate.

He said that the 11.90kg consignment was brought to the Skyway Aviation Handling Company, SAHCO, shed of the airport on August 5, by a freight agent from Yagba West LGA of Kogi.

Mr Babafemi said that the agent was promptly arrested upon the discovery that the seven cartons he presented for export contained parcels of the dangerous drug.

According to him, the items were wrapped with foil paper and concealed in the heads of hundreds of smoked catfish.

“It was concealed inside granulated melon and crayfish and packed among other food condiments going to Dubai,” he added.

Mr Babafemi said that NDLEA operatives had arrested the freight agent, who hails from Abeokuta West LGA in Ogun.

He quoted the chairman, NDLEA, retired, Buba Marwa, as charging the officers and their compatriots across the country to always remain steps ahead of the drug cartels. 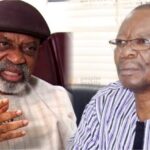