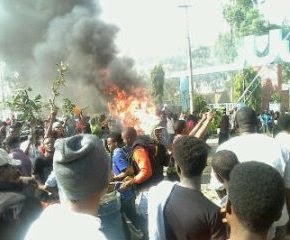 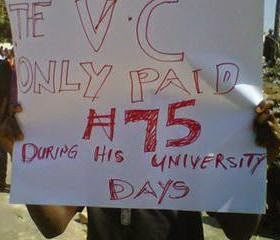 Students of the University of Jos continued their protests today following yesterday’s chaos in the school over what they say is a 100% increase in school fees. ‎The protesting students set fire in front of the school gate this afternoon, insisting that school authority must reduce their fees.

The students say the fee was N27,800 but has now been increased to #60,000. They also say they were forced to pay for developmental levy which has never been used for any development within the university. They said all effort by the student union government to speak with the Vice Chancellor of the university Prof. Hayward Babale Mafuyai, was met with a brick wall as the VC refused to negotiate with the students.

Following his refusal to speak with students, they took to the streets to protest, blocking all roads leading to the university of Jos thereby bringing all activities to a standstill. All university activities was also boycotted including the exams that was meant to start yesterday 24th November.