Two emaciated fishermen were recovering in a Pacific hospital today after enduring a five month ordeal drifting helplessly in an open boat.

The Papua New Guinea fishermen told officials in the town of Pohnpei in the Caroline Islands that they had survived by eating raw fish and drinking rainwater.

They were picked up by a fishing boat, badly sunburned and suffering from hunger, but have been described by hospital officials as being in ‘reasonable’ condition considering the many weeks they had spent drifting across the ocean.

Officials named the rescued men as Michael Bolong, 54, and Ambros Wavut, 28.A third man who had been on the tiny open boat had died, said the men. They claim that the man, Francis Dimansol, 48, died from severe health conditions while they were adrift in the Pacific.

‘The most we can establish at this stage is that Mr Dimansol had succumbed to the elements,’ said an island official.

While the rescued men have still to tell their story in detail, it is believed they drifted helplessly for at least 1000 miles after setting out on a fishing trip in early July from their village in the province of New Ireland, which comes under Papua New Guinea administration. 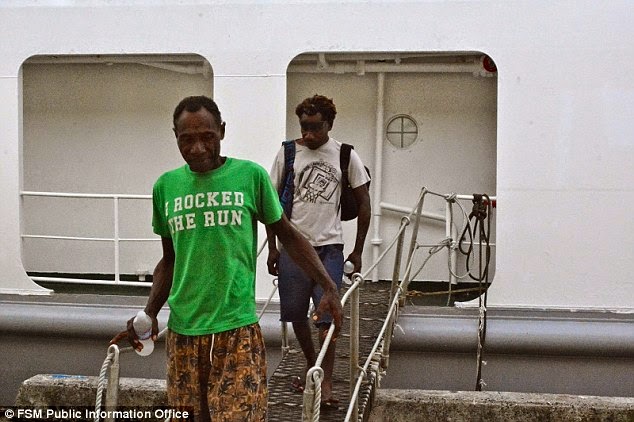 All was going well until the engine on their boat broke down and they became victims of the ocean currents.

‘They saw passing ships but could not get the message across that they were in trouble,’ said an official on Pohnpei.

According to a report from the Federated States of Micronesia government information service on the island of Yap, the men’s boat had been carried out to sea by a strong current.

The report said they had managed to survive a number of severe storms.

Their ordeal finally ended when they were picked up by a fishing boat called Yap Seagull, about 120 miles south of remote Kapingamarangi Island.

Radio New Zealand reported that the men were admitted to hospital for observation, although authorities claim the men are in good health, and that work is now underway to repatriate the men.

The men’s survival comes after another astonishing feat when Mexican fisherman Jose Alvarenga drifted across the Pacific for 13 months before his boat was washed ashore in the Marshall Islands earlier this year. 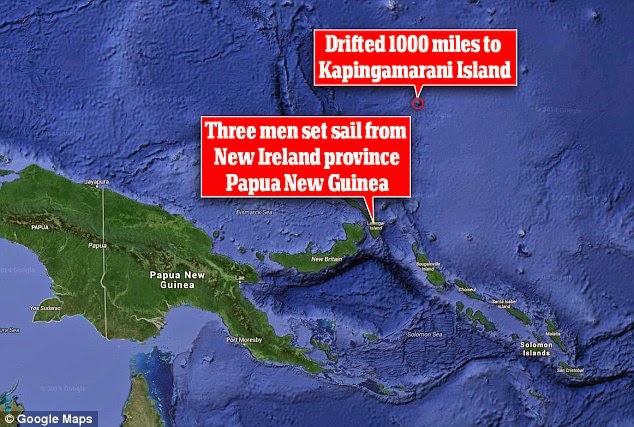