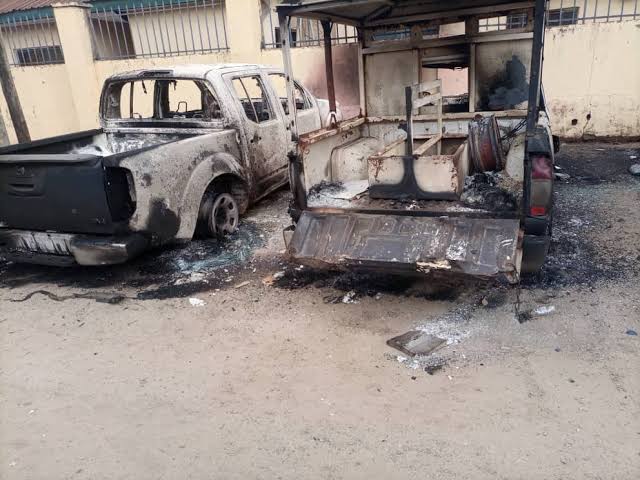 Gunnmen suspected to be members of the proscribed IPOB/ESN group have attacked and razed down Agwa Police Station in Imo State.

The attacked, which happened in the early hours of Saturday left four officers dead.

Reacting to the attack on Saturday, the State Police Commissioner Mohammed Barde said the suspected IPOB/ESN members used a tipper vehicle to force the gate of the police station open to gain entrance into the station before throwing Improvised Explosives Devices (IEDS) and petrol bombs that killed the officers on duty.

In a statement by the police spokesman, CSP Michael Abattam , the police Commissioner accused the IPOB)/ESN members for the attack.

“The hoodlums suspected to be members of the proscribed Indigenous People of Biafra (IPOB) and its militia affiliate, Eastern Security Network (ESN) attacked Agwa Police Station in their numbers. The hoodlums, who came in two vehicles and a tipper, shooting sporadically, used a tipper vehicle in forcing the gate open to gain entrance into the station, throwing Improvised Explosives Devices (IEDS) and petrol bombs.

“The police operatives of the division joined by the Command’s Tactical Teams gave the hoodlums a stiff resistance, engaging them in a gun duel. The hoodlums, who were fatally hit with a lot of casualties on their side, retreated, escaping in their vehicles.”