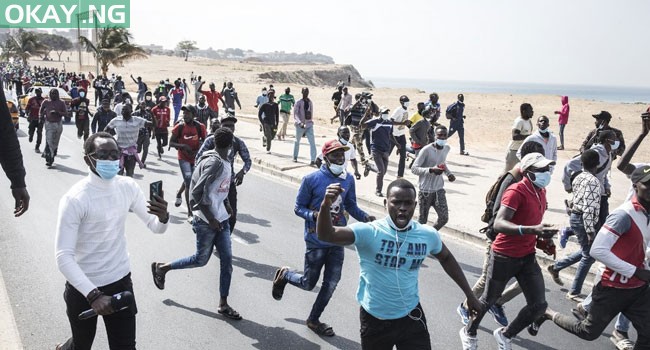 Senegalese authorities on Thursday suspended the signal of two private television stations for 72 hours, accusing them of broadcasting “in loop” images of unrest triggered by the arrest of an opposition leader.

Senegalese police have clashed with supporters of opposition leader Ousmane Sonko, who was arrested on Wednesday accused on breaching public order.

Meanwhile, Senegalese police clashed with supporters of Sonko on Thursday, leaving one person dead, a police official said — the first death in protests sparked by Sonko’s arrest the previous day.

Sonko, leader of the opposition Pastef party and former presidential candidate, is considered a key potential challenger to President Macky Sall in elections in three years.

He was detained on Wednesday for disturbing public order as demonstrations broke out ahead of his court appearance on a rape charge, triggering the worst unrest seen in years in a country generally known for its stability.

Angry protestors attacked the headquarters of media deemed close to the government Thursday evening, while authorities suspended two private television stations, accusing them of “stirring up hatred and violence”.

The death happened after clashes on Thursday in Bignona town in the southern Casamance region, the police official said.