The ex-wife of Jeff Bezos, Amazon CEO, Mackenzie Scott, has become the world’s richest woman, according to Bloomberg’s billionaires index.

The index, which is a daily ranking of the world’s richest people, said Scott achieved the feat with a net-worth of $68 billion.

The philanthropist’s new status comes after she overtook Françoise Bettencourt Meyers, an heiress to L’Oreal who controls 33% of the world’s largest cosmetics maker and counts a net-worth of $66.8 billion.

The development makes Scott the 12th richest person in the world in a list that features Bill Gates, Mark Zuckerberg and Elon Musk in the top four.

It also comes days after her former husband became the first man in the world to hit $200 billion net-worth.

The jump in her net-worth follows Amazon’s record stock growth amid the coronavirus pandemic which marked a plus in the value of her 4 percent ownership stake in the company.

The couple tied the knot in 1993 one year before Bezos started Amazon and had four children together.

They, however, parted ways in 2019, with the Amazon CEO paying a record $35 billion as divorce settlement.

In July, Scott had revealed that she donated $1.7 billion of her wealth in the past year to several different causes including racial equality, LGBTQ rights, public health, and climate change.

Obi Cubana reveals how he made his first million naira

I welcomed triplets but lost one, Kizz Daniel reveals as he buys houses for his twins 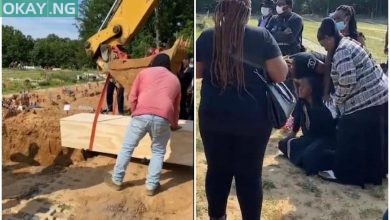 Sound Sultan buried amid tears in US [Photos/Video]